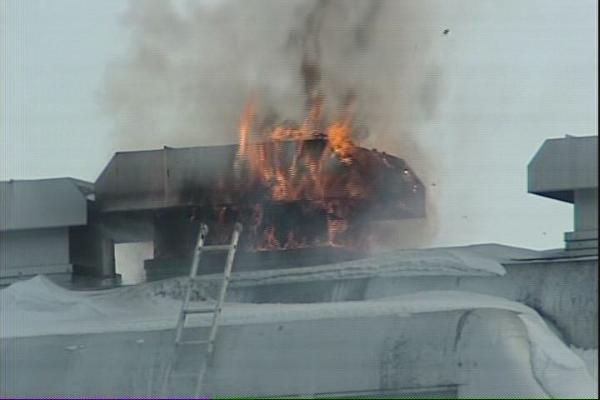 
(KMOV) -- Fire crews responded to smoke coming from the vacant Admiral on the downtown St. Louis Riverfront.
The fire reportedly started because of demolition work. Authorities say crews were using torches around ventilation units in what used to be the kitchen of the boat when some old grease caught fire.
The fire was controlled by fire extinguishers at first, but workers then had to call the fire department.
Officials say the fire started around 11:00 this morning. It reached 2-alarm status, but firefighters say it is now under control.
The Admiral closed last summer after decades as the President Casino.
The casino's owner, Pinnacle Entertainment, tried for months to keep it open but ultimately surrendered the gaming license.
There were no injuries. 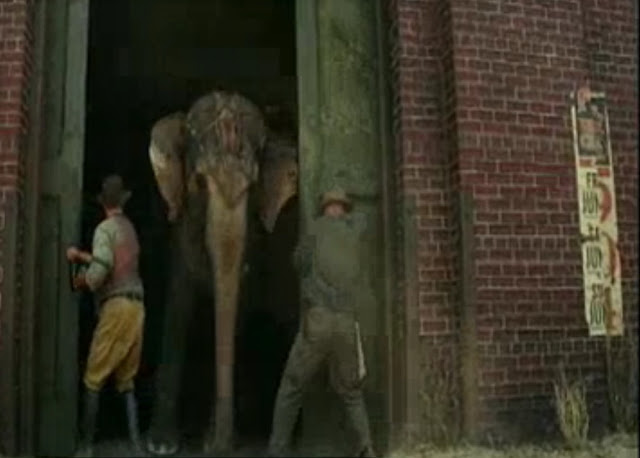 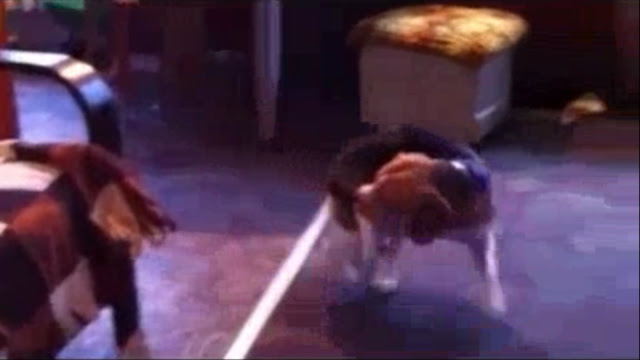 Gas pump prices that are around $3 a gallon now may seem like a bargain by the time your kids are on Easter egg hunts.

Pump prices have risen nearly 9 percent since Dec. 1 and topped $3.10 a gallon this week. That's the highest level since October 2008. The price may rise or fall a little over the next few months, but analysts expect it to range between $3.20 and $3.75 gallon by March and April ahead of the summer driving season.

The national average for regular gasoline about $3.12 a gallon on Friday, according to AAA, Wright Express and Oil Price Information Service. That's nearly 12 cents more than a month ago and 38 cents above a year ago.

Americans typically drive less in the winter. Demand is about 1 percentage point higher than a year ago but remains weaker than the historical average, said energy analyst Jim Ritterbusch. The nation's gasoline supplies remain above the five-year average.

Over the next couple of months, refineries will conduct regular maintenance to prepare for the changeover to summer driving mixes. That could affect supplies, but gas prices should remain steady to a few cents more, according to oil analyst Tom Kloza of Oil Price Information Service.

For every penny the price at the pump increases, it costs consumers overall an additional $4 million, according to Cameron Hanover analyst Peter Beutel. If the price goes up a dime a gallon, consumers pay $40 million more each day for that increase.
. Click Here to Read More. 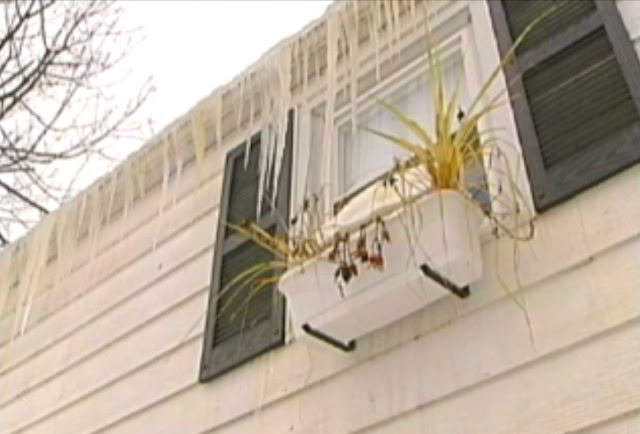 A mysterious greenish-yellow goo that fell from the sky has splattered homes in Snyder, N.Y., and triggered investigations by the FAA and the town's waste engineer.

Most of the houses along Washington Highway and Berryman Drive have taken down their Christmas lights, but are now sporting green or yellow icicles. The sides of houses are splashed with a deep brown substance and sidewalks are also spotted with the stuff.

Initial suspicions focused on "blue ice," the frozen human excrement known to fall from passing jetliners, but the FAA investigated and quickly dismissed that possibility.

"The local flight standards inspectors investigated the situation and determined it was not from an aircraft," FAA spokeswoman Arlene Salac told ABC News.

The Amherst Town Supervisor's Office said that they are looking into the situation.

"We have contacted our emergency services people and we also have a waste water treatment plant in town and the interim engineer for that is trying to get the debris tested," said Lisa Kistner, a spokeswoman for the town supervisor.

One resident provided Kistner with her own theory.

"We received a call this morning from a woman who owns a house on the same street, Washington Highway. She gave us her explanation because it happened to her last year," Kistner said.

"She said it's actually because the seagulls eat fast food at McDonald's, which upsets their digestive tract. They were eating French fries out of paper bags... As soon as she got the fast food restaurants to make sure all of their trash was cleaned up in their parking lots, she no longer had that problem," Kistner said. "She suggested that someone check the fast food parking lots because that is probably the root cause of this issue."

Bird experts who have seen pictures of the goo agree that they resemble bird droppings.

"The splotches we see on the siding are consistent with what we would expect from a large flock of birds such as European starlings, a species that is found in large numbers in upstate New York at this time of year," said Miyoko Chu, a spokesperson for the Cornell Lab of Ornithology after looking at video of purple splotches on house sidings.
. Click Here to Read More. 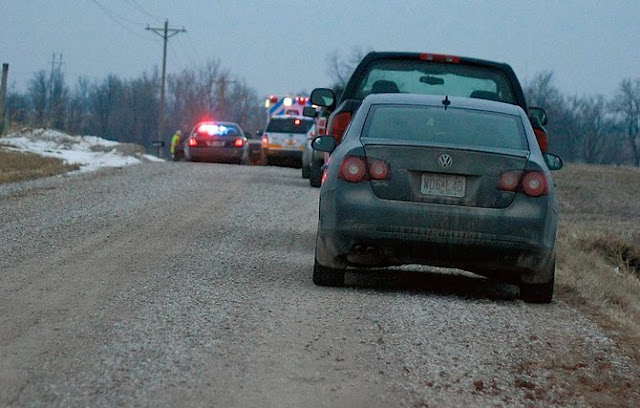 
Williamsburg — An accident with a North Callaway R-I school bus resulted in the death of a student Tuesday afternoon.
Officials with the Missouri Highway Patrol confirmed that Hunter Pitt, 6, was killed when getting off the bus at approximately 4:10 p.m. on County Road 182 near Williamsburg.
“A 6-year-old boy was exiting the bus with at least one other student,” said Sgt. Paul Reinsch with the Highway Patrol. “Apparently the bus driver didn’t realize the students weren’t all clear and pulled away.”
He said Pitt was pulled under the bus and run over. First-responders pronounced him dead at the scene.
“Our thoughts and prayers are with everyone involved,” North Callaway Schools Superintendent Bryan Thomsen said.
Thomsen said he could not “give any information or confirm anything at this time” about the accident, although he did confirm the district owns all of its buses.
Reinsch said none of the other 22 students on the bus were injured, although they had to wait for another bus to arrive to take them home as emergency officials began their investigation into the accident.
. Click Here to Read More. 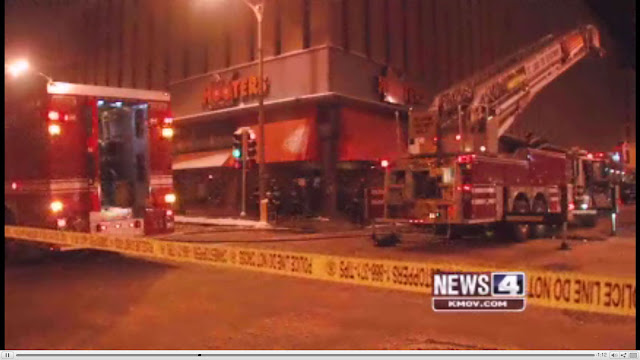 According to officials, a vehicle slammed into a parked vehicle in front of the Hooter's restaurant at 7th Street and Chestnut downtown. That parked car then went crashing into the restaurant, causing a small fire.

No injuries were reported.

The suspects fled the scene on foot, but were apprehended at 7th and Olive Street shortly before 10 p.m.

.
St. Louis, MO (KSDK) - People were enjoying the Blues-Red Wings game at the Hooter's restaurant in downtown St. Louis when a car came crashing into the building, setting everything ablaze.
Hooter's restaurant fire pictures
The accident occurred just after 9 p.m.
No one was injured in the accident.
Police said the two people responsible for the crash were arrested at a nearby parking garage.