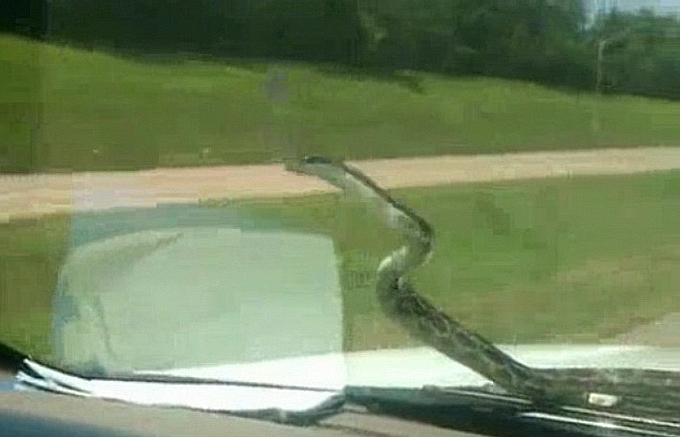 A Collierville, Tennessee couple's You Tube video of a snake crawling onto the windshield of their van at highway speed is getting clicks on the Internet.
. RICHLAND, Mo. • A young woman from southwest Missouri died on a canoe trip after being struck by lightning over the weekend on the Gasconade River.

Lindsay A. Smith, 20, of Fair Grove, Mo., was floating down the Gasconade River in a canoe with two men Saturday afternoon in Pulaski County.

The Missouri Water Patrol says Smith and the two men got out of the canoe because of bad weather Saturday. They were on a gravel bar when lightning apparently hit a tree in their general vicinity, said Pulaski County Coroner Mikel Hartness.

The lightning strike on the river was about a half mile downstream from the Gasconade Hills Resort near Richland.

The lightning strike knocked Smith and the two men unconscious, Hartness said. One of the men regained consciousness and called for police.

"We don't know how long they were unconscious.," Hartness said.

Hartness said Smith was pronounced dead at the scene.

The two men were taken to an area hospital. One of those men was treated and released; the other remained hospitalized Monday, said Highway Patrol Sgt. David Bierer.

"The only thing they remember is one minute standing there talking, and the next minute waking up," Bierer said. "They were just trying to get out of the storm."

Bierer said ideally they would have gone to a building when the storm hit. But there was nothing like that nearby in which to seek shelter, he said.

"Most of the float streams are pretty isolated in the country," Bierer said. "There is really no place for people to get out of the storm. If you stay in your canoe, you're in the water. If you get out, you're under trees" -- both unsafe spots when it comes to lightning strikes.