Tractor-trailer Crash I-44 Near St. Clair, Mo. Rollover backs up traffic for miles 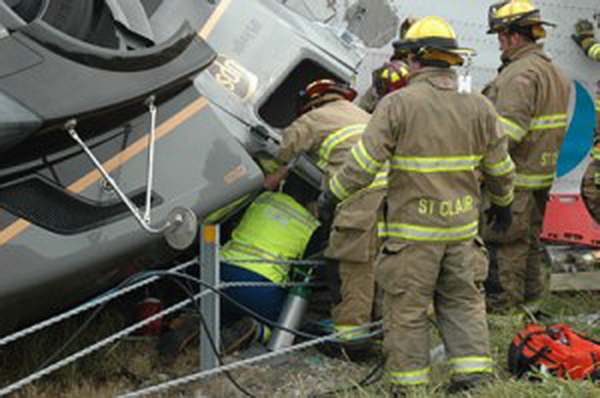 
Tractor-trailer crash on I-44 near St. Clair backs up traffic for miles

ST. CLAIR • Missouri state troopers are investigating a tractor-trailer crash near St. Clair that closed westbound lanes of Interstate 44 this morning and backed up traffic for miles, authorities said.
The tractor-trailer crashed about 8:45 a.m. about a mile west of the St. Clair rest area, said Sgt. Al Nothum of the Missouri Highway Patrol. The truck veered into the median and overturned, trapping the driver for more than an hour. The truck did not hit other vehicles.
The driver was conscious and talking when rescuers pulled him from the cab shortly after 10 a.m, Nothum said. He was taken to a nearby hospital for treatment.
Nothum said the crash has caused major congestion and may continue to back up traffic for hours.

Westbound Interstate 44 was closed for more than two hours Wednesday morning after a double-trailer UPS freight semi crashed near the 234.2 mile marker just west of the Anaconda Bridge.
The semi was westbound on the interstate when it tipped to the driver's side and into the median and came to rest against the barrier cables. The cab and front trailer tipped. The back trailer remained upright.
It was unknown on Wednesday morning what caused the accident.
It took nearly two hours for emergency personnel to extricate the driver, who then was transported by Air Evac Lifeteam to St. John's Mercy Medical Center in Creve Coeur. The extent of his injuries was unknown  mid-morning Wednesday. He was conscious while inside the cab.
Westbound I-44 traffic was rerouted to the North Service Road at the St. Clair 239 exit. Traffic was backed up on the highway from the accident scene to the weigh station.
Emergency personnel from St. Clair and Sullivan responded. Both Missouri Highway Patrol officers and Franklin County Sheriff's Office deputies also were on the scene.
The accident occurred shortly after 7:30 a.m.

Kirkwood, Mo. Mom's 900 Dollar Message "THANKS FOR THE DOWNGRADE. YOU SHOULD ALL BE FIRED! 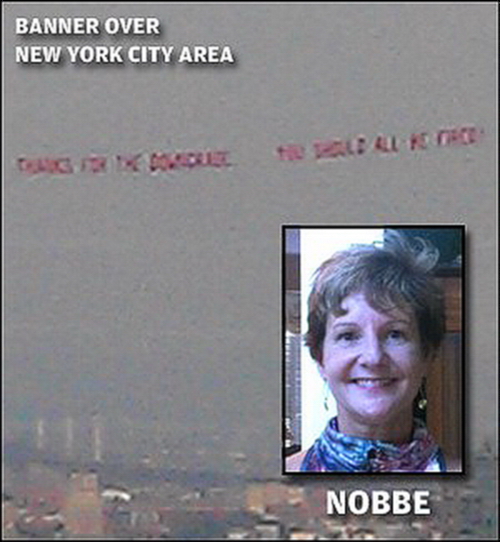 KIRKWOOD • Lucy Nobbe wanted to send a message.
She was fed up. A single mother of two and a municipal bond broker who works from home in this comfortable suburb, Nobbe was shocked by the historic U.S. credit downgrade.
She blamed Congress for the disastrous result. She considers herself apolitical, but this was too much. She spent the weekend fuming. "I couldn't believe this happened because they were acting silly and being irresponsible," Nobbe says.
So she came up with an idea. She paid $895 to hire an airplane to fly around New York City on Tuesday pulling a banner that read: "THANKS FOR THE DOWNGRADE. YOU SHOULD ALL BE FIRED!"
She says she did not expect much reaction. She was wrong.
Her message sent New York financial blogs buzzing and office worker heads turning, unleashing an online flood of approval and questions about who she was addressing, plus a hunt to discover who was behind the stunt.
Her simple nine-word statement seemed to strike a powerful populist chord in a nation hammered by recent stock market losses and a forever-languid economy, a place where opinion polls suggest the national political process is a rich source of frustration.
That it was the work of someone like Nobbe - not an activist organization, not a guerilla ad campaign, just a mom from Middle America - only made the message more attractive.
"I felt like I had to do something," Nobbe, 51, explains.
She says she is not a strident person. Not the kind of person to protest on street corners or even bring a handmade sign to a ballgame. Her daughters, 11-year-old Holly and 15-year-old Jacqueline, agree. They say they approve of what their mom did.
"I thought it'd be a good example for them," Nobbe says.
Her original plan was to fly the banner over Washington, D.C. She wanted to direct her message to the politicians. But after calling a airplane banner company, she discovered flight restrictions around the nation's capital made that impossible. She was told to try New York.
And she did. During lunchtime Tuesday, her banner of large red letters flew.
Some commentators thought her ire was directed at Standard & Poors, the New York-based ratings agency that kicked the United States down a notch. But Nobbe says she had no idea the agency is located there.
And she would have been more precise with her message but it was limited to 48 letters.
She says she wanted to remain anonymous, but her identity quickly leaked out. By Tuesday afternoon, she was fielding calls from her bosses at Wedbush Morgan Securities, where she is a vice president. She was nervous. She says her actions were just that of a person concerned about the future.
Standing in her foyer with her two daughters, Nobbe offers no regrets.
"I thought," she says, "it was an important thing to do."

KIRKWOOD, Mo. -- A Kirkwood, Mo., mom was so fed up with what's going on in Washington and on Wall Street, that she decided to send a message -- by plane.
Lucy Nobbe paid to have a banner made and flown over lower Manhattan on Tuesday. The banner said: "Thanks for the downgrade, you should all be fired."
Nobbe said she was so angry about the way lawmakers argued and bickered over the debt ceiling, that she couldn't get it out of her head.
The single mom and financial broker said she woke up in the middle of the night Sunday with an idea to send a plane flying around Washington with her message to lawmakers. But there was a slight hiccup: There's a no-fly zone around D.C., so she settled on New York instead.
The plane flew for two hours around lower Manhattan -- over Wall Street, downtown New York, the Statue of Liberty and New York Harbor, said Justin Jaye of flysigns.com, the company Nobbe used to fly the banner.
In the process, she generated a lot of buzz online, in the headlines and with her two daughters.
"I thought that is something that I could do that wouldn't cost a million dollars and maybe someone would listen to me," said Nobbe .
"She's very different from other moms, and I'm really proud of her because she does stand up for what she really wants," said Nobbe's daughter, Holly. "And I'm really glad to have a mom like that. "
It cost Nobbe just under $900 to fly the plane around New York, she said. Flysigns.com was so impressed with what she did that they gave her a discount.
"It feels pretty good," Nobbe said. "A lot of times I think those things and I don't do it. And this time I actually did it."
Nobbe hopes lawmakers will see her message and decide to cut their summer breaks short in order to get the country's finances in order.
___________________________________________ _____________________________________ . .