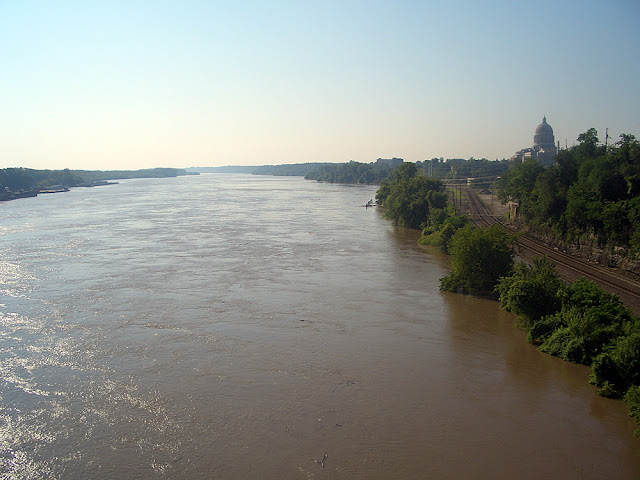 Associated Press
ST. LOUIS (AP) - Flooding along the Missouri River continues to disrupt Amtrak passenger train service between St. Louis and Kansas City.
Amtrak said Monday it's extending the suspension of the morning train from St. Louis and the afternoon train from Kansas City at least until July 24. The adjustments are needed to accommodate Union Pacific trains that use some of the same track, which is owned by Union Pacific and runs along the river.
The affect trains are number 311 and number 316 of a route called the Missouri River Runner.
The morning 313 train from Kansas City and the afternoon 314 train from St. Louis remain in service.


Amtrak shuts down some routes until Sunday at least

There’s flood water on 20 different places on Amtrak’s River Route – that’s the path between Kansas City and Jefferson City. The transportation department rail administrator Rod Mastman says full service could be back late this weekend, though the projections change frequently.
Mastman says there are two sets of tracks, one near the river and one farther away. All the trips from the river route have been put on the route through Sedalia. He says that slows traffic on the Sedalia line, and causes lots of headaches for coal trains and Amtrak.

He says this causes a backup in traffic because freight trains filled with coal move slower than passenger trains. If passengers have their trip canceled, there are three options. Amtrak is providing busses, an alternate trip on a different line for a different day, or a full refund.

Mushroom hunters discovered a secret marijuana growing operation on the property of Kansas City International Airport. Waiting until harvest time to seize the crop,  investigators believe it was the work of Mexican Nationals.
Captain Eric Holland of the Platte County Sheriff’s Office is convinced they stopped the work of a sophisticated Mexican drug trafficking organization.
Why would foreign nationals want to plant their crop on U.S. Soil? Holland says it’s about keeping overhead down while branding your illegal product. He says its unlikely it would have sold well if people knew it was ditch weed from a farm in Missouri.
It’s estimated the plants had a street value of  five million dollars.
.

By Chris Oberholtz, Multimedia Producer
By Betsy Webster, News Reporter
PLATTE COUNTY, MO (KCTV) -
SWAT teams found several thousand marijuana plants in fields southwest of Kansas City International Airport on airport property.
The Platte County Sheriff's Office along with members of the Missouri State Highway Patrol and the Kansas City Police Department conducted the tactical operation.
Each plant averages 1 lb. of marijuana worth $1,000. The total harvest is expected to have a value of $2 to $4 million.
Authorities say it is a trend to grow near airports and federal land because it lessens the likelihood of trespassers. Law enforcement officials point to Mexican drug trafficking organizations as the problem. They said illegal immigrants are often used to work and cultivate the fields and then distribute the marijuana.
These fields are believed to be in its second harvest, with three living quarters built out of sticks.
Inside were canned goods, bowls, toothpaste and a rifle. SWAT teams expected the growers to be there when they arrived.
However, authorities are not sure why the growers were not there when the 4 a.m. raid occurred.
Mushroom hunters discovered the plants in April, but authorities waited until the plants were close to harvest to conduct the raid.
According to authorities, the growers built their own well for watering the plants. The field of plants was located about three miles from Farley Hampton Road and Hwy N.
Authorities will destroy the plants with a bulldozer and dump them in a field. Currently, the field is being treated as a crime scene.
It took three miles of off-road travel to get to the fields.
Capt. Erik Holland of the Platte County Sheriff's Office said using government property means less of a chance of trespassers.
"They can easily identify the flight patterns of planes coming in and out of the airports, therefore, they can tell if there was a law enforcement plane coming over doing enforcement," Holland said.