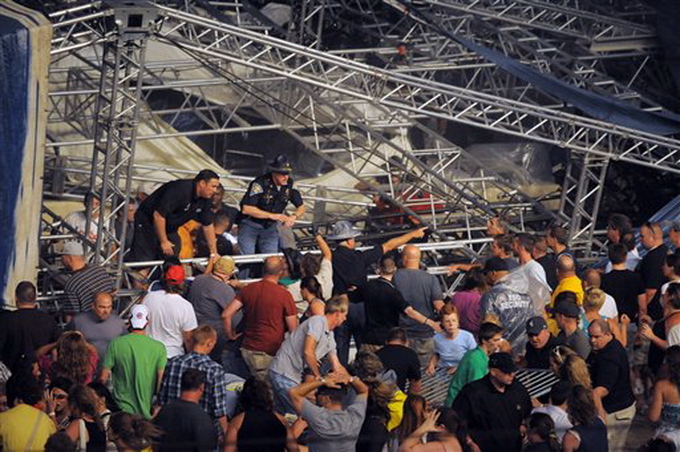 Indianapolis - The wind gust that toppled a stage at the Indiana State Fair Saturday night, killing five and injuring dozens of fans waiting for the country band Sugarland to perform, was a "fluke" that no one could have anticipated, the governor and others said Sunday.
The wind was far stronger than that in other areas of the fairgrounds, said Dan McCarthy, chief meteorologist for the National Weather Service in Indiana. He estimated the gust at 60 to 70 mph.
Gov. Mitch Daniels said precautions were taken before the storm, but no one could have foreseen such a strong gust focused in one place. Some witnesses have said that while a storm was expected, rain hadn't begun to fall when the wind sent the stage rigging falling into the crowd of terrified fans.
"This is the finest event of its kind in America, this is the finest one we've ever had, and this desperately sad, as far as I can tell fluke event doesn't change that," Daniels said.
Four people were killed when the metal scaffolding that holds lights and other stage equipment fell, and a fifth died overnight at a hospital, Indiana State Police 1st Sgt. Dave Bursten said. The county coroner's office identified the victims as Alina Bigjohny, 23, of Fort Wayne; Christina Santiago, 29, of Chicago; and three Indianapolis residents: 42-year-old Tammy Vandam, 49-year-old Glenn Goodrich and 51-year-old Nathan Byrd. Byrd died overnight.
Forty-five people were taken to hospitals, and some may have gone on their own, Bursten said. Indiana University Health said 12 of the 26 people treated at its hospitals were still there, including three at its children's hospital.
Sugarland singer Jennifer Nettles sent a statement to The Associated Press through her manager, saying she watched recaps of the collapse on the news "in horror."
"I am so moved," she said. "Moved by the grief of those families who lost loved ones. Moved by the pain of those who were injured and the fear of their families. Moved by the great heroism as I watched so many brave Indianapolis fans actually run toward the stage to try and help lift and rescue those injured. Moved by the quickness and organization of the emergency workers who set up the triage and tended to the injured."
Nettles and Kristian Bush, who perform as Sugarland, canceled their Sunday show at the Iowa State Fair.
Concert-goers said opening act Sara Bareilles had finished performing and the crowd was waiting for Sugarland to take the stage when the storm hit just before 9 p.m. They said an announcer alerted them that severe weather was possible and gave instructions on what to do if an evacuation was necessary. But the announcer also said concert organizers hoped the show would go on, and many fans stayed put.
Witnesses said dirt, dust, rain and wind came barreling up the fairground's main thoroughfare minutes later and the stage collapsed.
Jessica Alsman said the towering, metal scaffolding "kind of wobbled at first." Then pandemonium set in as it fell.
"As soon as we saw the wind gust, the wind was in our faces," Alsman said. She and three friends grabbed each other and formed a chain.
"You can't imagine _ we just thought it was going to rain or something," Alsman said.
Indiana's position in the Midwest has long made it prone to volatile changes in weather. In April 2006, tornado-force winds hit Indianapolis just after thousands of people left a free outdoor concert by John Mellencamp held as part of the NCAA men's Final Four basketball tournament.
And in May 2004, a tornado touched down south of the Indianapolis Motor Speedway, delaying the start of the Indianapolis 500 and forcing a nearly two-hour interruption in the race.