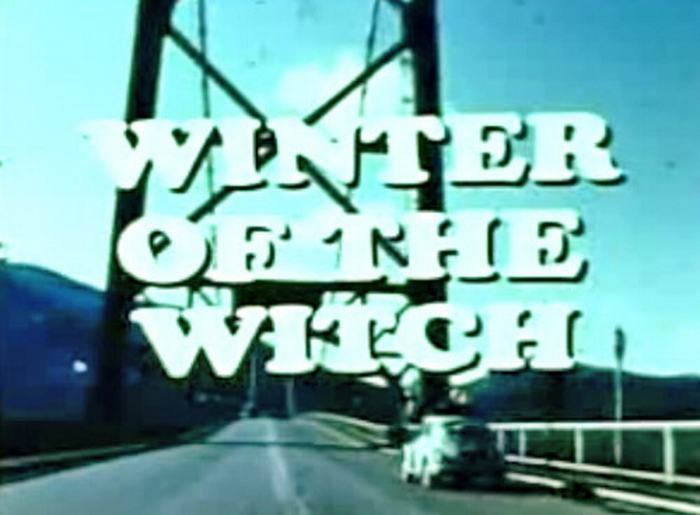 Sometime in the early to mid 1970s — perhaps in your library, perhaps in a classroom — you saw a 23-minute short film called Winter of the Witch.   It is based on a children’s book called Old Black Witch by Harry and Wende Devlin.  The film was made in 1969 and stars Hermione Gingold as the Witch, Roger Morgan (in his only known role) as Nicky, Anna Strasberg as the unnamed single mother, and narration by Burgess Meredith.

The comments on the Internet Movie Database entry for this movie tell a very similar story of people searching their whole lives for the source of their strange memory about a witch making pancakes:
.

For years, Scott Murdock was haunted by a cinematic image fluttering at the periphery of his memory. It involved a witch. She was serving pancakes. And there were lots of colorful bubbles floating over the screen.
He couldn't shake the vision from his mind. Yet he had no idea where it came from.
"Everybody I asked about it thought I was nuts," said Murdock, 41, a computer programmer in Kansas City, Mo.
He wasn't alone. In Madison, Wis., humorist Ann Imig, 37, had a similarly unsettling memory.
"I would ask people, 'Don't you remember that movie with the witch and the magical blueberry pancakes?'" she recalled. "They'd say, 'No, Ann, you're high.'"
Repeated queries and, for some, years of online sleuthing confirmed that the film is real: a 1969 short called "Winter of the Witch." The film, now easy to track down on the Internet, is being discovered by a generation of adults in their 30s and 40s with a fervor more typically associated with locating a long-lost relative than a kiddie movie.
Scroll through the movie's reviews on the Internet Movie Database, and you might think you've stumbled upon a support group for people who have experienced something akin to alien abduction. Typical subject lines read, "Validation for all," and "I'm not the only one!" Then there is, "OMG!!! ... Finally!!! I have been wondering about this movie for YEARS!!!"
The resurrection of the long-dormant little movie is one more example of the ways in which the online world has become a de facto nostalgia clearinghouse. Sites such as YouTube and eBay now provide instant access to millions of pieces of everyday ephemera that most people assume had been lost forever: educational filmstrips, old commercials, kitsch toys, school lunchboxes -- the list goes on. Rediscovering such things can be surprisingly powerful and emotional, a visceral connection to the magic of childhood.

'Witch' was popular in schools
Based on the 1963 children's picture book "Old Black Witch," the movie stars Anna Strasberg as a single mother who moves with her young son into a country house haunted by a witch (the velvet-voiced Hermione Gingold). The witch turns out to have a handy knack for cooking pancakes that make people instantly happy, as illustrated by a blast of circus music and a burst of colorful bubbles crudely superimposed on the screen.
The first project of Parents' Magazine Films and producer Thomas Sand, "Winter of the Witch" was distributed by the Learning Corp. of America to schools nationwide. Thousands of students watched it on old-fashioned projectors in gyms, libraries and auditoriums; for many, it was a favorite rainy-day activity or a Halloween treat.
By all rights, the quirky production should have faded away, just like the turtlenecks and head scarves it features. But something about "Winter of the Witch" burrowed its way into the consciousness of a subset of children who saw it, and it never left, leading many to search for it well into adulthood.
"Those colored dots must have burned themselves into some people's brains," said Gerald Herman, who directed the film for $500 while a student at New York University. He now runs an art-house cinema in Hanoi, Vietnam.
Certainly, the psychedelic dots make the movie all the more intriguing for grown-ups. "It was obviously a drug film," proclaimed one viewer online. Another gleefully recalled the "magic trippy pancakes."
Herman dismissed the notion of any latent drug theme.
"We didn't have any hidden agenda while making the movie," he said. "This was Parents' Magazine, after all."

Films link to a simpler time
In a world that seems fraught with anxiety and danger, the film and others like it are a kind of emotional comfort food, a direct link back to a simpler, safer era -- a time when getting to watch a 22-minute movie at school was a special event, not something you could do on a phone, and when children's entertainment wasn't replete with product tie-ins.
Filled with period details such as Volkswagen Beetles and TV dinners, the film's slightly homespun, melancholy look also encapsulates what it felt like to be a child 30 to 40 years ago, right down to the crackling of the splotchy, color-saturated 16-millimeter film.
"It was a safe and cozy feeling sitting on the shag rug in my preschool watching that film," said Imig, a mother of two who likens the experience of seeing "Winter of the Witch" again -- the film is now on Google Videos and can be readily purchased on DVD -- to being in a time machine. "There's just something wonderfully validating to know it exists."
Murdock's 2007 blog post about his four-year-long search to find the film has become one of the places the witch faithful convene. They share their eerily similar tales of reconnecting with the film, drawn there by searching variations of "happy pancake witch."

The "Winter of the Witch": An Illustrated Summary

Nicky & Mom leave The City for unknown reasons. Where's Dad?
As the story begins, a single mom empties her refrigerator and her son Nicky helps pack. They leave their tiny apartment in The City with only what possessions they can fit in their car, and drive to a small town with no living arrangements made for them.
Luckily when they arrive they find a shady realtor who is more than happy to sell them a haunted house for $400.

$400 gets you a lot of house in 1969, as long as you don't mind a small witch infestation.
They’re only in the house for a few moments before The Witch appears, curious about these new people who have invaded her home.

I'll get you, my pretty, and your little boy, too.
Nicky and his mom are not afraid, and inexplicably Mom agrees to Nicky’s request of “Can we keep her?”
Mom and Nicky fix up their part of the house, while The Witch sits in the attic spinning cobwebs and being all sad.
Before long Nicky and the Witch become friends, and chat about the good old days of Witchery.  It seems that since the world has become such a scary place, witches are no longer needed and have no purpose anymore.   Nicky suggests that she cook for them.   This gives the Witch an idea.

(*insert evil cackling laughter*)
The next morning the Witch (who shall hereafter be referred to as The HPW (for The Happy Pancake Witch) comes down to the kitchen to whip up a batch of blueberry pancakes.

"Eye of newt, toe of frog, LSD, tears of a virgin..."
Ignoring all advice about not taking food from strangers or witches, Nicky digs in to the cakes…

Hey, little boy, want some flapjacks?
Nicky immediately falls under the spell of The HPW’s laced cakes and gets really, really happy.

So happy, he sees psychadelic spots
Mom walks in at that moment and demands to know WTF the HPW has done to her son!

BUSTED!!!!!
Thinking fast, The HPW realizes the only way out of this situation is to shove a cake into Mom’s face.

Mom foams blue at the mouth with happiness
Just then these two old bags show up to rag about what a crappy housekeeper Mom is. Their batty remarks are just about to wear off the happiness spell. Luckily Nicky knows just how to shut old people up…

The cure for catty old women

"Ambrosia!"
With everyone happy again, Mom decides to open a
drug house
pancake parlor to spread the
LSD-laced
happiness-infused joy.

Is this where you come for the "pancakes"?
…and Mom, Nicky, and The HPW worked hard to further contaminate the food supply.

OBEY
With the local population placated and news of the Happy Pancakes spreading throughout th greater region, The HPW finally reveals to Nicky her evil plan. Once her pancakes make everyone forget the worries of the world and they are all happy, she will once again start scaring and terrorizing them all! 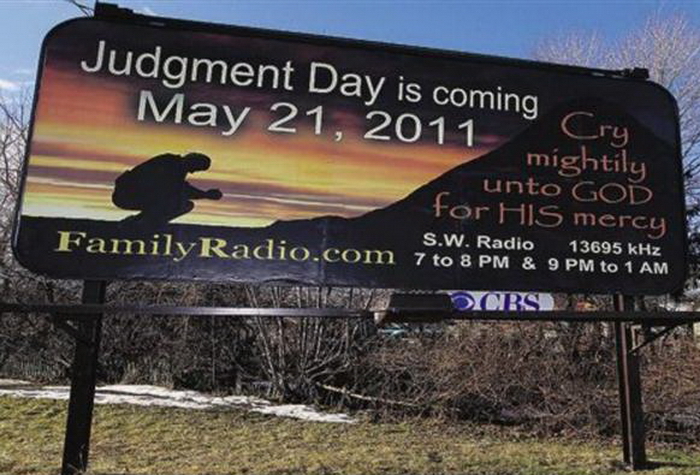 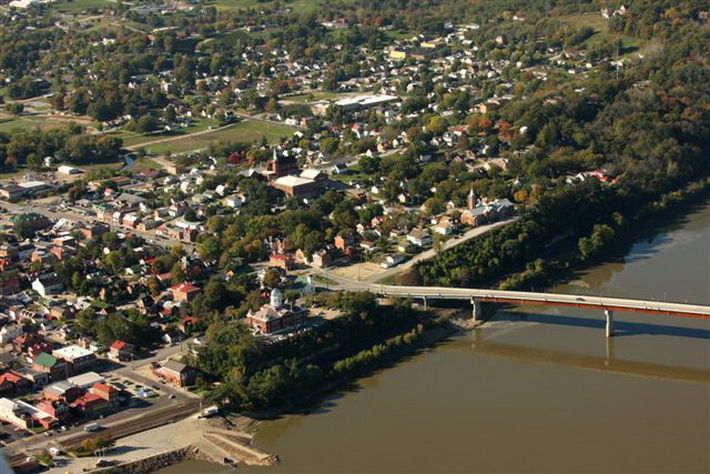 Summer means a lot of things. Road trips, sandy beaches, and festivals are just a few of the things the remind us that summer has arrived. Summer also means it's time to pop the cork and pull out your favorite seasonal wines. However, there's nothing like combining your love for wine with your love for travel. We've put together a few of the best summer wine destinations in the U.S.

Asheville, North Carolina: The southeastern United States hasn't always been known for their wine production, but Asheville has established itself as a top wine destination because of the Biltmore Estate. One of the largest mansions in the world, visitors could easily spend a weekend at the Biltmore Estate alone. Special wine tastings and events often take place on weekends during the summer.

Hermann, Missouri: Hermann, Missouri is one of the smallest destinations on this list, but it has been making wine as long as anybody in the U.S., dating back to the mid-1800s. Hermann is better for a long weekend retreat, as it is located amidst the backroads of Missouri. It doesn't feature the same number of wineries as places like Northern California, but still has a lot to offer in the way of a historic town and beautiful scenery.