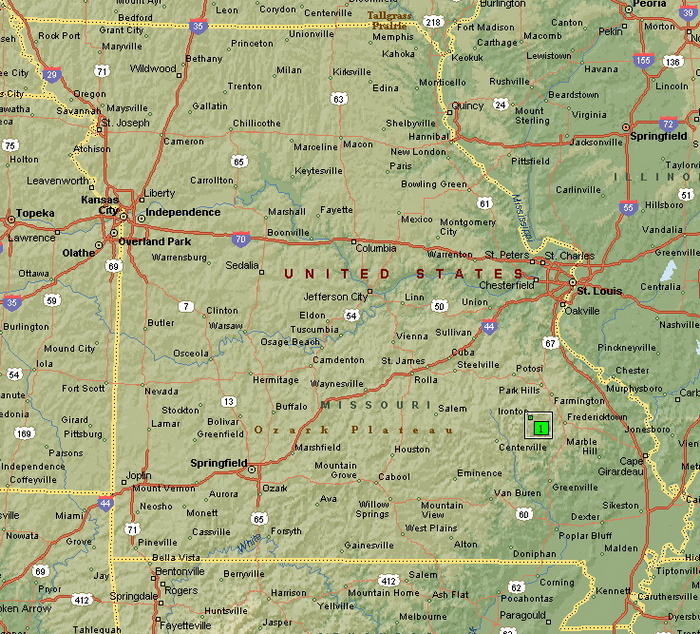 IRONTON, Mo. • The single-engine aircraft that went missing on Sunday has been found, officials said Saturday.
The wreckage was discovered about eight miles southeast of Ironton in Madison County, Mo. Ironton is about 75 miles south of St. Louis.
Officials did not disclose whether there were any survivors. The National Transportation Safety Board will investigate the cause of the crash.
The Missouri wing of the Civil Air Patrol aircrews had been scouring the region all week, after the Piper Lance disappeared from radar early Sunday morning near Doniphan, while traveling from Arkansas to Wisconsin.
The search covered 5,100 square miles and lasted about 100 hours.
Late Wednesday, a person living near the crash site told authorities that they were awakened early Sunday by the sound of a low-flying plane. It was around the time the Piper Lance went missing.
A Wisconsin radio station has reported that an Eau Claire, Wisc., businesswoman was on board the plane.
Lt. Col. Randy Fuller, the mission coordinator for the Civil Air Patrol, said that tip allowed them to narrow their search. Fuller said the Madison County sheriff's office verified the wreckage about midnight Friday.
Crews had to chop down trees and battle rough terrain to reach the plane. Vehicles could not get through, so the searchers ultimately ended up hiking two miles, Fuller said.

Debris from the wreckage was discovered just before midnight about eight miles southeast of Ironton, Missouri near Farmington.
Officials at the scene say there are no survivors.
They say there were three people on board the plane.  It's unclear if they died on impact.
Investigators also say they don't know what caused the plane to crash.
Officials had been searching for the plane since last Sunday when it disappeared during a flight from Arkansas to Wisconsin.
Officials are not saying who was on board.

State Senate Gets Back to Business

JEFFERSON CITY, Mo. (April 1, 2011) — Spring recess is now over, and senators returned to the Capitol refreshed and ready to get down to business on Monday, March 28.
The House of Representatives debated and completed discussion on the budget bills this week, sending them over to the Senate, where they were first read on Wednesday. Next week, the Senate will begin discussion of the budget bills, which are constitutionally required to be finally approved by both bodies of Legislature by May 6.
In addition to our normal legislative duties, we have had numerous visitors from the district this week.
Tuesday, March 29, marked the Truman State University Showcase at the Capitol. Many students were there with various displays, the Truman Brass Choir performed in the rotunda, and I had a chance to visit with several students and representatives of this fine institute of higher learning.
Among our other visitors were representatives from CSTAR, the Community Substance Abuse and Rehabilitation program from the Missouri Department of Mental Health, the St. James Teen Outreach Program, Hermann Elementary School and East Central College in Swedeborg.
In addition, there were hundreds of FFA students at the Capitol on Thursday, March 31, seeing all the sights of the Capitol and learning about how the Legislature works in Missouri. I had the pleasure of visiting with many of them, and hearing their ideas and concerns as well.
I’m pleased to see so many young people interested in the legislative process, as many of these students are destined to be our senators and representatives of the future.
Thank you for reading this and for your participation in state government.
Sen. Dan Brown is a member of the Veteran’s Affairs Committee, Emerging Issues Committee, Agriculture, Food Production & Outdoor Resources Committee, Education Committee, and Appropriations Committee, and is vice-chair of the Pensions & Urban Affairs Committee. He can be reached at the following address: Sen. Dan Brown, State Capitol Building, Room 434, Jefferson City, MO 65101, via his website at www.senate.mo.gov/brown, by phone at (573) 751.5713, by fax at (573) 751.0733, or by e-mailing him at dan.brown@senate.mo.gov. 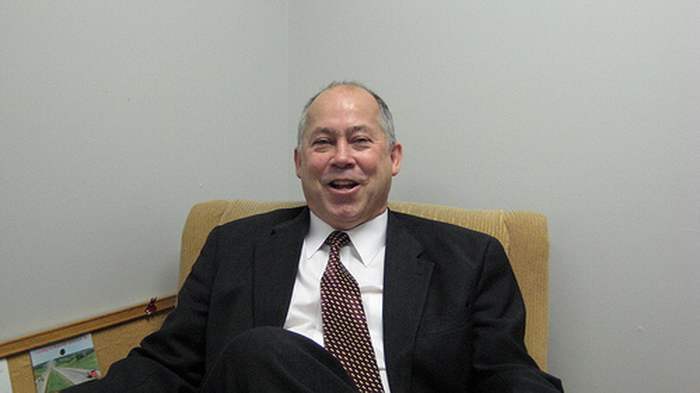 
JEFFERSON CITY, Mo. — Missouri Gov. Jay Nixon has rescinded an appointment to the State Tax Commission after some state senators raised concerns about a decision the nominee made while presiding as judge in a rape case a decade ago.

Nixon appointed Jeff Schaeperkoetter to the tax panel last July and reappointed him in January. But the Democratic governor withdrew Schaeperkoetter's appointment this week with little explanation.

"We believe that was the appropriate course to take," Nixon spokesman Scott Holste said and declined to elaborate.

Schaeperkoetter did not return telephone messages left Thursday and Friday by The Associated Press.

The governor's decision came after some Republican senators raised concerns about a sentence Schaeperkoetter imposed as a circuit judge in December 2000. Jurors convicted Matthew J. Wasiak of rape, sodomy and deviate sexual assault and recommended sentences of 10 years on each of the first two counts and seven years for the sexual assault charge. Schaeperkoetter suspended the prison sentences and instead ordered Wasiak to spend 120 days in jail, placed him on probation and directed him to pay $5,000 in restitution to the victim.

State Sen. Jane Cunningham was among those opposing Schaeperkoetter's appointment to the Tax Commission.

"As a woman, I cannot possibly defend ratifying the nomination for someone who has made that kind of decision — I just cannot defend it," said Cunningham, R-Chesterfield.

Cunningham cited a 2001 article by the Riverfront Times that described how Wasiak drugged the victim's drink at a bar and then took the woozy woman to his home. In that article, Schaeperkoetter defended his decision and was quoted as saying at the sentencing: "If anybody is listening, this is why you don't go to bars."

Cunningham said she met with Schaeperkoetter recently about his appointment and he still defended his sentencing decision.
Senate President Pro Tem Rob Mayer, R-Dexter, said he also had concerns initially about Schaeperkoetter's appointment.

"There was an issue about a court case," Mayer said. "But later on, after having discussions with him and some others, I was not going to hold him up."

Before being appointed to the State Tax Commission, Schaeperkoetter was director of facilities management, design and construction in Nixon's Office of Administration. Schaeperkoetter previously worked for Nixon in the attorney general's office.

Schaeperkoetter was elected in 1992 as circuit judge for Osage, Gasconade and Franklin counties and won re-election to a second six-year term in 1998. He served from 1981 to 1989 in the Missouri House and from 1989 to 1993 in the Missouri Senate.

Baby Toddler Get Down Staircase Boogie For Bottle WEB VIDEO 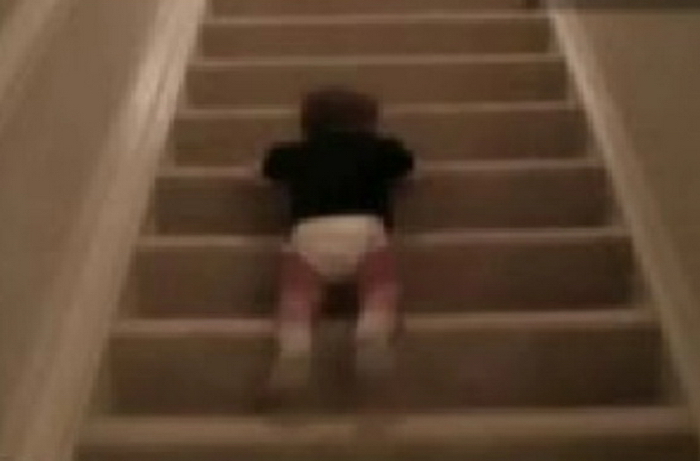 .
A baby crawling along the second floor of a home approaches an exposed staircase and sees that her parents have a bottle awaiting her at the bottom of the stairs.

The toddler wastes no time in backing down the first step and sliding down the staircase in quick fashion to get her bottle.


U.S. Government Offers up to $5 Million Reward for Information Regarding Shootings of Two ICE Agents

WASHINGTON—The Departments of Justice, State, and Homeland Security today jointly announced a reward of up to $5 million for information leading to the arrest and/or conviction of individuals allegedly responsible for the murder of U.S. Immigration and Customs Enforcement (ICE) Homeland Security Investigations (HSI) Special Agent Jaime Zapata and the attempted murder of ICE HSI Special Agent Victor Avila.
The FBI, in conjunction with ICE, has established a 24-hour tip line based in the United States to process the information. Individuals in the United States with information are encouraged to call 1-866-859-9778. Individuals in Mexico can provide information by calling +001 800-225-5324. Spanish language speakers will be available using either number. Anyone wishing to e-mail information can do so by visiting: https://tips.fbi.gov. All information is considered confidential.
Also today, the government of Mexico announced a reward of up to 10 million pesos for information leading to the arrest of individuals allegedly responsible for the murder and attempted murder. Individuals can call (55) 53-46-15-44 and (55) 53-46-00-00, extension 4748 in Mexico City. Outside of Mexico City, individuals can call 01-800-831-31-96 to provide information. Information may also be sent to the following e-mail address: denunciapgr@gob.mx. More information about the government of Mexico’s award can be found at www.recompensas.gob.mx.
Zapata and Avila were ambushed in Mexico on February 15, 2011, as they were traveling in their U.S. government-issued vehicle from the state of San Luis Potosi to Mexico City. Mexican authorities have detained several individuals in connection with this incident and the investigation continues at this time.
The U.S. reward is being offered by the U.S. government through the U.S. Department of State’s Narcotics Rewards Program, which was established by Congress in 1986. Additional information on this program can be found at: www.state.gov/p/inl/narc/rewards/index.htm.