BY TIM SAMPSON
Missouri News Horizon
JEFFERSON CITY, Mo. – Even though she was just a child at the time, Martha Hamilton can still vividly recall the day her sister went missing.
She remembers playing in the yard with a group of neighborhood kids. She remembers when one of the adults first noticed that her sister was no longer among them. There was a frantic search of the house and then police were quickly called. It’s all still fresh in Hamilton’s mind, even though it took place in 1965.
“She was playing in the yard with some of the older kids in the family, and then suddenly they noticed that Beth was not there,” she said.
Hamilton’s sister, Elizabeth, is the longest currently missing child in the state of Missouri. But even though it’s been 46 years, the pain has never fully gone away.
On Friday, Hamilton shared her sister’s story with dozens of others who’ve endured similar losses, speaking at the fourth annual Missing or Unidentified Persons Awareness Day at the state capitol building.
It’s the product of a group called Missouri Missing, which tries to raise awareness and provide support for families of missing persons. Currently more than 1,200 Missourians are listed as missing or unidentified. Their faces adorned buttons and t-shirts, worn by family members who continue to hope their loved ones will one day be found.
Missouri Missing was first started in 2007 by two mothers who had lost children. Marianne Asher-Chapman’s daughter, Angie, first went missing in 2003. Although Angie’s husband ultimately confessed in 2008 to killing his wife, her body has never been recovered and Asher-Chapman still considers her daughter missing.
Part of the reason Asher-Chapman wanted to start an awareness group for missing persons is the frustration she ran into dealing with investigators. Many missing person cases are left to languish if they are not solved immediately.
“The first three or four years were hideous – hideous,” she said. “The last couple of years we had new investigators that took over. They were wonderful. They helped me a lot. We still don’t have her. She’s still missing, but they work – they worked the case.”
One of the group’s main goals has been to establish June 17 as a day for raising awareness. It’s the day four years ago that the daughter of Peggy Florence, the other founder of the organization, went missing. Gov. Jay Nixon issued an official proclamation to mark the event and Asher-Chapman said that other states have slowly been joining the effort.
“Eight other states last year chose June 17 for their state and it is my hope that someday it will be National Missing and Unidentified Awareness Day,” she said.
To look up information on missing Missourians or to become involved in the organization, visit their website at www.missourimissing.org. 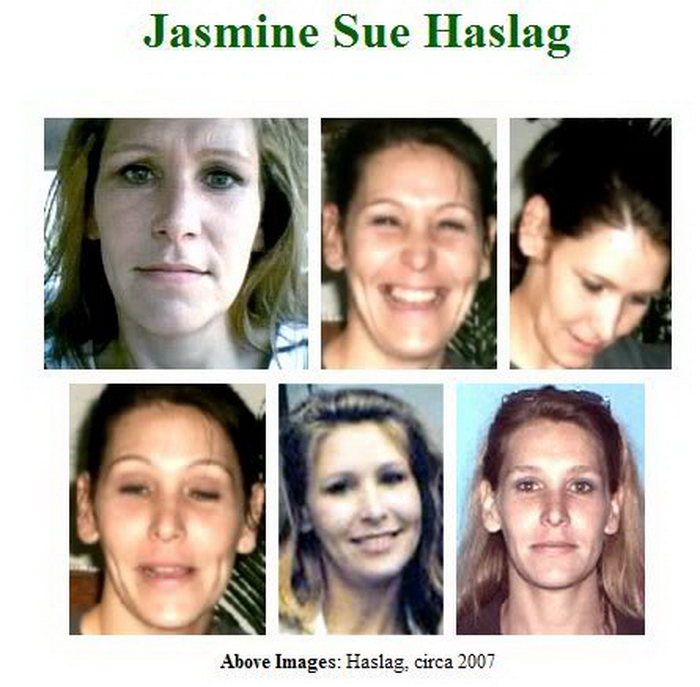 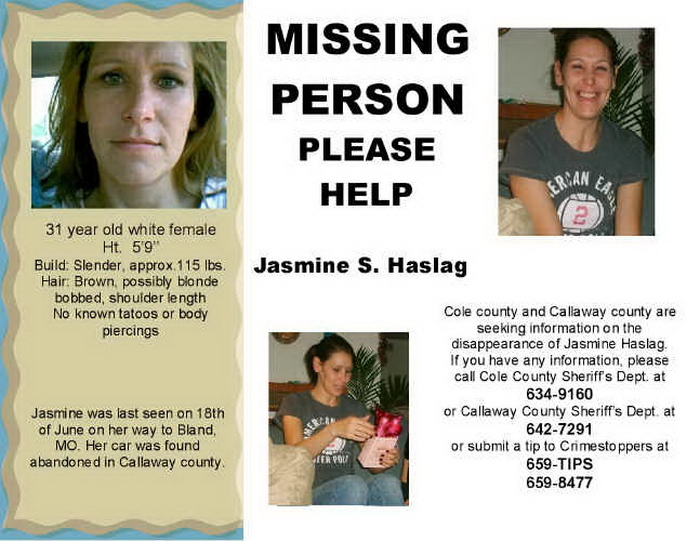 
Foul play is now being suspected by the Cole County Sheriff's Department in the disappearance of Jasmine Haslag.
Haslag was last seen a month ago when she was going to Bland, Mo., to pick up her children. Her vehicle was recovered by the Callaway County Sheriff's Department in a wooded area off of highway 94.
Jefferson City Area Crime Stoppers is offering a reward for information that leads to an arrest. Anyone with information can call (573) 659-8477 or go to http://www.jeffcitycrimestoppers.com

Details of Disappearance
Jasmine was last seen at approximately 12:00pm at her residence in the 13000 block Minnie St. in Russellville, MO. Jasmine was scheduled to pick up her children the following day in Bland, Missouri. Her vehicle was later found abandoned on Rt PP of Hwy 94 in Callaway County across the Missouri River.
Investigating Agency
If you have any information concerning this case, please contact:
Cole County Sheriff's Department
(573) 659-8477