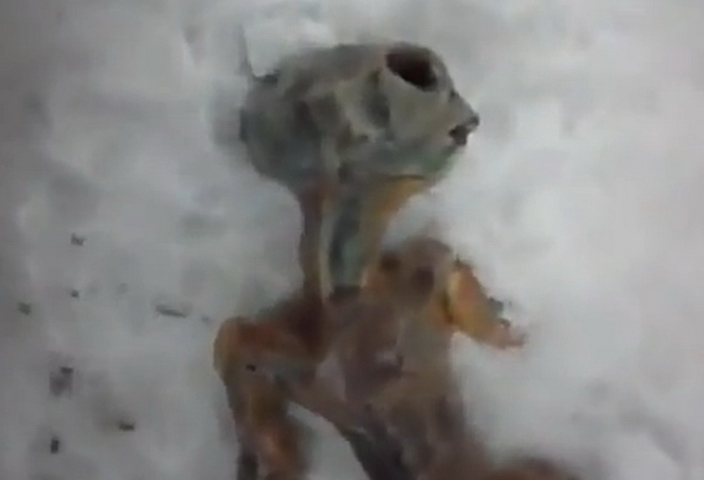 .
Translation:
"we found him over there"
"We found him around two hours ago"
"It must have been lying here for days"

Michael Cohen m.cohen@allnewsweb.com
Around one month ago this publication reported on a major UFO event that occurred in the region of Irkutsk in Russia's Siberia. Hundreds of villagers saw a huge object, glowing pink and blue, hurtle towards Earth before loudly impacting the ground  in a wooded area . The event received widespread coverage in Russia and was reported by Inter-fax, Russia's government news agency (See article here). In the West the event was completely ignored if not deliberately kept from public view.
An enormous team of government officials, including military personal, secret service agents and science ministry officials made their was to the UFO crash site within hours of the event occurring.
Now it seems a video has been leaked onto the Internet showing a dead Alien (see video below), found in the Republic of Buryatia, not far from the site of the UFO crash. Is the alien seen in this video a survivor of that crash who managed to leave the area only to die as a result of Russia's harsh conditions?
.

.
A YouTube video of a so-called "dead alien" found in Russia is quickly becoming an Internet sensation.

The video, posted to YouTube on Sunday, has attracted nearly 1.5 million views and is now making the rounds on Twitter and Facebook.
Uploaded by All News Web, which calls itself "The World's Only Inter-Galactic News Service," the video's description says it shows a "dead alien" found in Russia's Republic Buryatia, at a site not far from an alleged UFO event one month ago in Siberia.
The fuzzy film, apparently shot as two Russian-speaking men walk across a snowy countryside, features a close-up of what is appears to be the shriveled up body of a tiny extra-terrestrial being. Like the aliens of pop culture, the dead creature in the YouTube video has an enlarged gray head and huge, dark eyes.
"We found him over there. ... We found him around two hours ago. ... It must have been lying here for days", the translation beneath the video says.
But UFO believers shouldn't get their hopes up too high.
Video Is 'Clearly a Hoax," Investigator Says
Benjamin Radford, a paranormal investigator and managing editor of Skeptical Inquirer magazine, said the video is most certainly the work of pranksters.
"It's clearly a hoax," he said.
The first "big red flag" is the way the video was shot, he said. Instead of just stumbling upon the alien, the camera man gives the viewer a wide-angle so-called "establishing shot" of the landscape before zooming right onto the alien as he and his friend find it.
"This is film-making 101. We see this in sitcoms, we see this in virtually every film in order to establish a place and scene for the viewer," he said. "It makes sense in the context of a fake film but it does not make sense in the context of someone suddenly finding this alien creature."

The video's credibility is also not helped by the fact that the men in the video are audibly laughing, Radford said.
"I don't speak Russian, but I can tell you when someone's laughing," Radford said.
Radford also said that the so-called "alien" looks too much like the "little green man" of our favorite sci-fi films.
The video is fuzzy enough to be compelling, Radford said, but that still doesn't mask the reality that the video's alien was likely handmade with some clear Jello and animal or chicken skin.
. . Click Here to Read More. 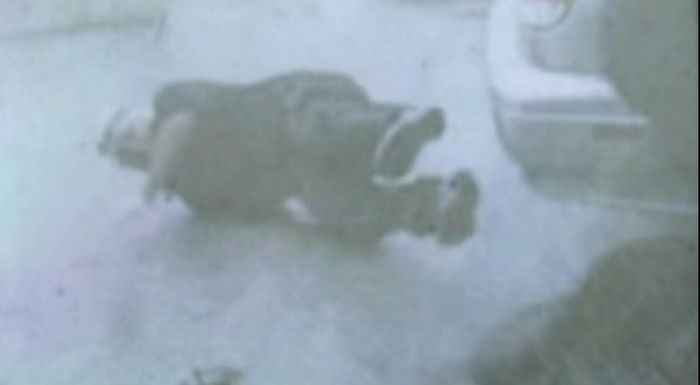 
Three Struck by Car During Fight at McDonald's Hiring Day

It's an event aimed at hiring thousands of local people, but police say a fight between two women got out of control.

"I was filling out my application when I saw two girls fighting," said Joseph Shores, an eyewitness. "I don't know their names, but they were fighting over drama, hood stuff."

The fight went down at the McDonald's located on East 105th and St. Clair.

Police say the fight was over a boy, and it started verbally and escalated into a physical fight that spilled into the crowd.

After that, witnesses say, the unthinkable happened.

"One girl was on top of the driver, beating her. Then the driver went forward, somehow it kicked into reverse, and the car went backwards, hitting three people. It was crazy!" said Arnecia Patterson.

Another eyewitness, Antoine Grey, captured the incident on his cell phone and showed it exclusively to Fox 8 News.

"Someone got into a car, backed up a car, and pummeled like four or five people," said Grey.

Three adults and one 17-year-old juvenile female were taken by EMS to MetroHealth Medical Center.

Their injuries do not appear to be serious at this time.

Among the injured was the owner of the McDonald's, as well as a manager.

"We are cooperating with police. There is nothing more important than the safety and well being of the people who go in and out of our restaurants," said McDonald's spokesman, Joe Woods.

The restaurant was immediately closed and hiring was suspended temporarily. The closure disappointed the people who came up and waited in line.

"You know, we are trying to get people jobs and this us the way people act? It makes it bad for people like me who can't get a job," added Patterson.

Woods said the incident will not affect those who were hired prior to the accident.

Police are still looking for the driver of the car. The passenger, Natasha Grayer, 22, of Cleveland, was arrested for felonious assault. 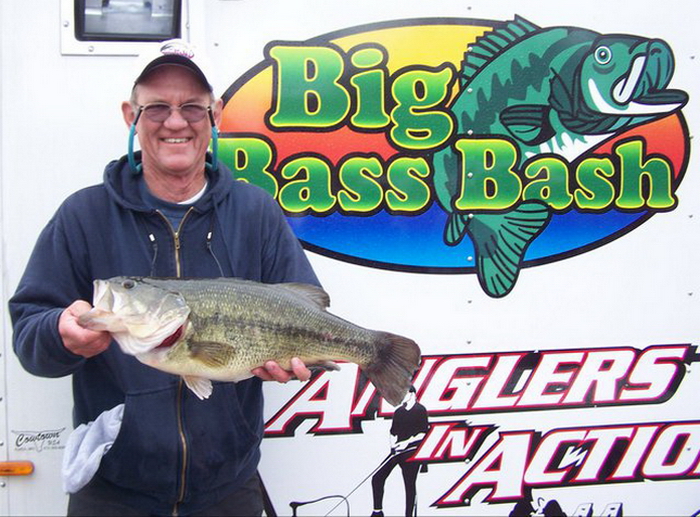 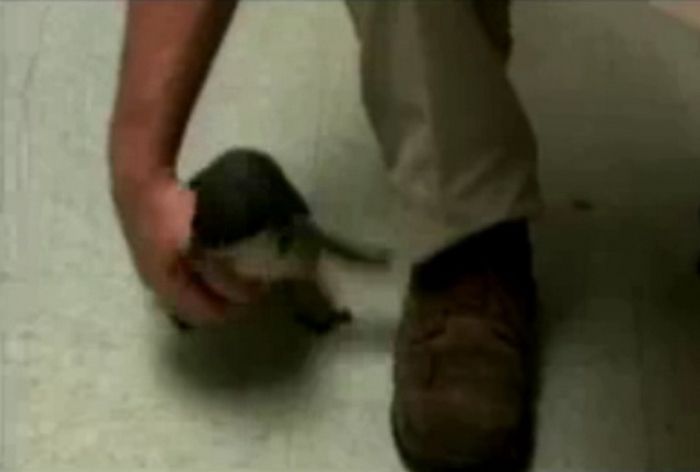 .
"Cookie," a baby penguin was born at the Cincinnati Zoo, serves as the mascot for its bird house. The woman shooting the video was working as a guest zoo keeper as research for a book, but took a liking to Cookie. The penguin suffers from a disease called bumblefoot, a bacterial infection on its feet, requiring bandages to be changed every day.
Over time, Cookie apparently got used to being around people and even showed signs of affection, such as waddling over and snuggling with a zoo keeper's hand.
The video was originally posted in January 2010, but has gone viral over the last few weeks, amassing nearly 600,000 hits 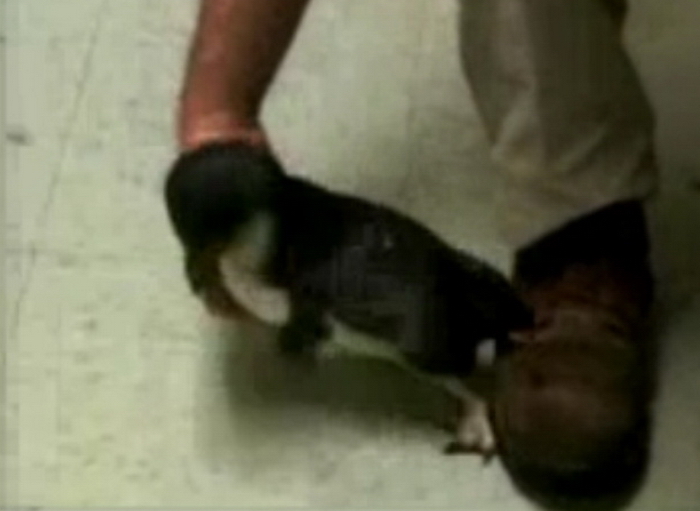 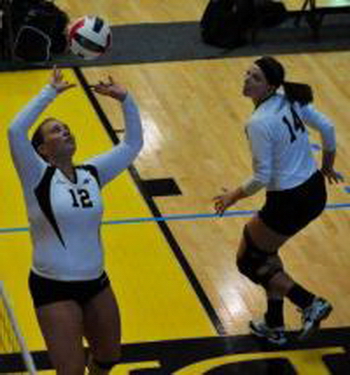 Setter Kasey Kirchhoffer comes to Thibodaux after a standout career at East Central College in Union, Mo. Kirchoffer was named all-conference, all-region and all-American in each of her two seasons at ECC. Kirchhoffer, a native of Hermann, Mo., led the Falcons to a Midwest Community College Athletic Conference Championship in 2010, as well as consecutive NJCAA Region 16 Championships in 2009 and 2010.
. . Click Here to Read More. 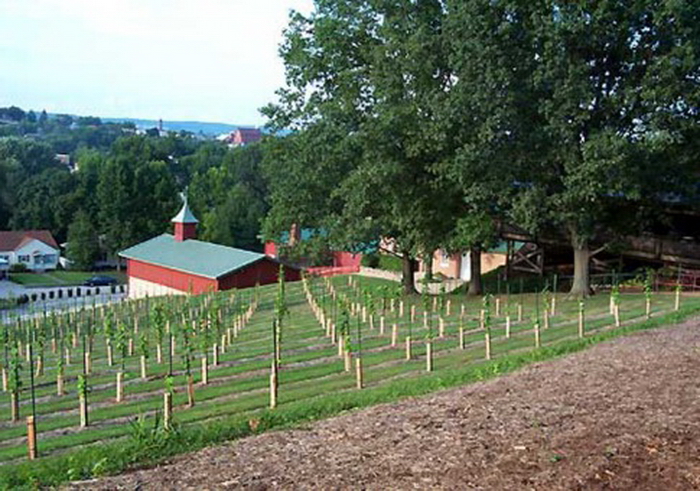 Founded by German immigrants in 1837, Hermann retains that cultural heritage with its annual Teutonic-themed festivals, such as Wurstfest, Maifest (complete with May-pole circling), and Oktoberfest, with all the brats and beers that suggests. Just an hour and a half's drive from St. Louis, and you'll find yourself in a unique blend of Americana and old-world flavor. So strap on some lederhosen and save room for a pretzel or two. Just don't go overboard, because the town also boasts an ideal location along the Katy trail, which provides bicyclists a pristine setting for winding their way through Missouri.