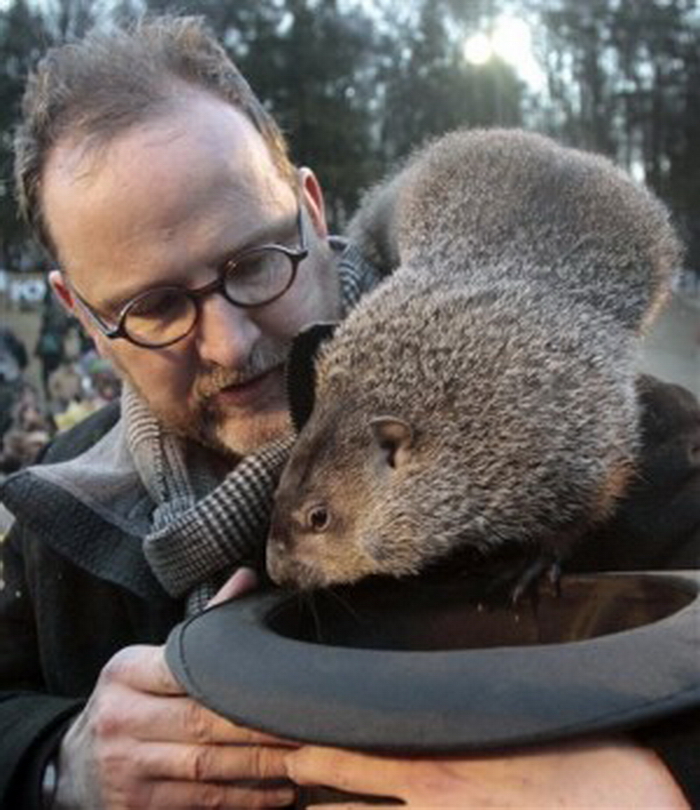 
To the relief of the winter-weary, the world's most famous groundhog is predicting an early spring.

Punxsutawney Phil emerged around dawn on Groundhog Day on Wednesday to make his 125th annual weather forecast in front of thousands who braved muddy, icy conditions to hear his handlers reveal that Pennsylvania's prophetic rodent had not seen his shadow.

Storm Wasn't as Bad as Feared, but cold and wind still present dangers. 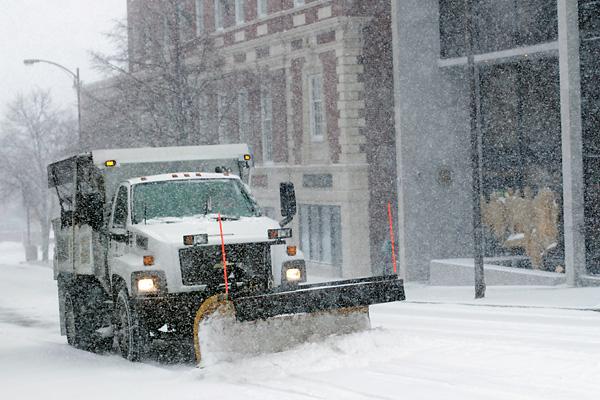 
Missouri Department of Transportation Department spokeswoman Kara Price urged motorists to put off their morning commute a bit longer to give crews time to catch up.
At 9 a.m., many of the main highways were still covered by snow or partly covered.


Officials say it appears that many commuters were staying home.
Meanwhile, state officials reopened at 6:50 a.m. the 200-mile stretch of Interstate 70 from Wentzville to Kansas City. It had been closed since Tuesday because of whiteout conditions.
Yet Interstate 44 in southwest Missouri remains closed from Springfield to the Oklahoma border. Price said crews are trying to evaluate the entrance and exit ramps to see if they are safe for travel.
Wind speeds are forecast to pick up today, increasing worries by Ameren that gusts will bring down power lines.


Ameren Missouri reports that 126 of its customers — including three in St. Louis County — are without electrical service. The situation is more severe in Illinois, where Ameren Illinois says more than 36,000 customers--out of more than 1.2 million — are without service. Most of the outages are in central and eastern Illinois.

What Ameren calls a situation of "galloping conductors" is the biggest concern today. High winds can throw power lines together, causing outages. If the winds are strong enough, the stress on lines can snap the cross arms of utility poles.

Snowfall totals in some parts of Missouri were staggering: 18 inches in Joplin, 17 in Columbia, Mo., over a foot in Hannibal. Totals in some areas could reach 2 feet, even more, by the time the snow stops today.
St. Louis, along the very edge of the line, seemed to luck out. Forecasters warned of ice, then up to a foot of snow. Instead, most of the metro area got mostly sleet by late evening Tuesday. Sixty miles north of St. Louis city was a foot of snow; 60 miles south, almost nothing.
The 100 members of the National Guard who were assigned to help out at police stations in St. Louis city and county were still here Wednesday morning but had little to do. Another 100 were on standby in Festus for route clearance and debris removal.
A CHANGING FORECAST
The snowstorm Tuesday was pretty much a bust in St. Louis but now comes from the National Weather Service a wind chill advisory.
Flurries might linger until this afternoon but building in behind them is very cold air. Temperatures will drop to below zero tonight and early tomorrow, the weather service says. Along with the cold will come breezes, producing wind chill values of 15 to 24 degrees below zero through late tomorrow morning.
As a result, the wind chill advisory is in effect from 6 p.m. today to noon tomorrow. The advisory area covers all of metro St. Louis and central Missouri. Frostbite can happen within 30 minutes on exposed skin in dangerously low wind-chill values.

The weather service says that people planning to be outside should use common sense and dress warmly. As for the weather service blizzard warning yesterday? Canceled.
PLAYING CATCH-UP
For the crews plowing the roads, the ice-sleet-snow mix posed a challenge.
Price, the MoDOT spokeswoman, said the crews worked overnight but are still playing catch-up.
"We had a ton of snow, so that's a lot of work to do," she said. "The snow didn't technically stop until late last night, around 9 o'clock or after.
"They made a lot of progress, but our biggest challenge was that the sleet had come down first and snow had covered all of the sleet. It's not that we can just plow through," she added.
The crews are putting down a salt, sand and cinder mix.
Motorists can check road conditions at www.modot.org
. Click Here to Read More.