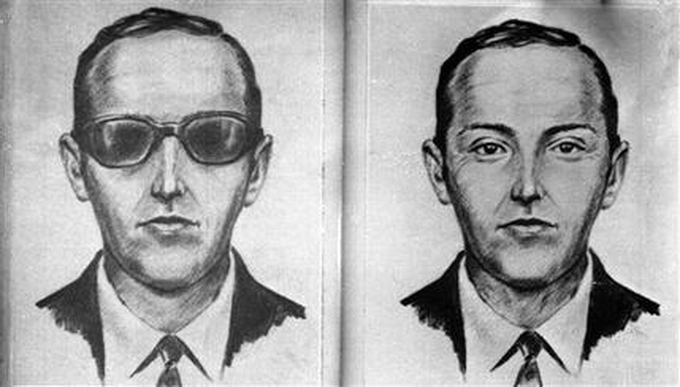 OKLAHOMA CITY (AP) -- An Oklahoma woman claims an uncle who planned something "very mischievous" over the holidays in 1971 was D.B. Cooper, the never-captured hijacker who jumped out of a plane with $200,000.
Marla Cooper of Oklahoma City - who was 8 years old at the time of the hijacking - told ABC News in an interview broadcast Wednesday that she is certain her uncle Lynn Doyle Cooper leaped from a Northwest Orient plane not far from her grandmother's home in Sisters, Ore. She said she made the connection after piecing together remarks made by her father in 1995 and her mother in 2009. She did not say why she chose to speak out now.
"My two uncles, who I only saw at holiday time, were planning something very mischievous. I was watching them using some very expensive walkie-talkies that they had purchased," she said on "Good Morning America."
When contacted later Wednesday, Marla Cooper referred an Associated Press reporter to a family friend who is scheduling interviews.
FBI agent Fred Gutt said Monday that the agency was following up on a "credible" new lead in the unsolved D.B. Cooper case. Gutt declined Wednesday to say whether Marla Cooper was connected to that lead, which focuses on a suspect who died more than 10 years ago. Marla Cooper did not say in her ABC interview when her uncle died.
"It is an unsolved crime and we are obligated to address that if new, credible information comes to us," Gutt said. "But it's definitely a low-priority matter because we primary have ongoing criminal activity today that has real threat to the community today."
Marla Cooper told ABC her uncles said they were going turkey hunting around Thanksgiving 1971, but L.D. Cooper came home claiming he had been in a car accident.
"My uncle L.D. was wearing a white T-shirt and he was bloody and bruised and a mess, and I was horrified. I began to cry. My other uncle, who was with L.D., said `Marla just shut up and go get your dad,'" she said.
Marla Cooper told ABC she heard her uncle say at the time, "'We did it, our money problems are over, we hijacked an airplane,'" and that just before he died in 1995 her father mentioned his brother and said, "'Don't you remember he hijacked that airplane?'"
In 2009, she said, her mother made a similar comment that raised her suspicions again.
Cooper told ABC she contacted the FBI "as soon as I was sure that what I was remembering were real memories."
The FBI said Monday that a new lead came to the bureau after the tipster initially discussed the case with a retired law enforcement officer, who then contacted the agency. Gutt said only after the FBI contacted the tipster directly did the person speak with investigators.
Marla Cooper did not discuss on ABC how or when she reached out to the FBI, but said she recently provided investigators with a guitar strap belonging to her uncle to be tested for fingerprints.
Investigators have tested a guitar strap from the suspect who is the subject of the new lead, Gutt said Wednesday, but found it wasn't suitable for fingerprint analysis. They are now working with family members to identify other items that can be analyzed. But the FBI doesn't have a timeframe for how long it will take to vet the lead, which is something they've known about for more than a year, Gutt said.
Federal investigators have checked more than 1,000 leads since the suspect bailed out on Nov. 24, 1971, over the Pacific Northwest. The suspect gave his name as "Dan Cooper" and claimed shortly after Flight 305 took off from Portland, Ore., that he had a bomb. Passengers were exchanged in Seattle for parachutes and money. In 1980, a boy found several thousand dollars in $20 bills from the ransom decomposing along the Columbia River.
---
Associated Press writer Mike Baker in Olympia, Wash., contributed to this report.
___________________________________________ _____________________________________ . .

Obama Enjoys A hamburger Today for $2.4 Trillion Tomorrow: Takes his debt team out for burgers 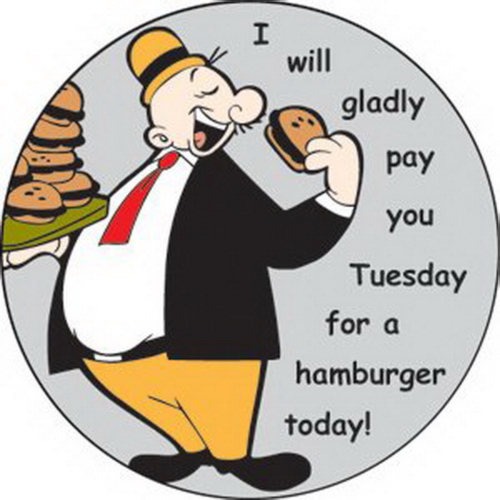 
A hamburger today for $2.4 trillion tomorrow

President Obama took his debt team out for burgers at Good Stuff Eatery on Capitol Hill on Wednesday, giving new meaning to the "Popeye" character Wimpy's catchphrase "I'd gladly pay you Tuesday, for a hamburger today."
The White House said the outing, at which the president consumed a meal of about 1,700 calories, was a reward for the debt team's "nonstop" work over the last few months as they worked out a deal with Capitol Hill to extend the government's borrowing limit. Mr. Obama signed the extension into law Tuesday, just ahead of the deadline, allowing up to $2.4 trillion in debt to be accumulated.
Good Stuff marks the latest stop in Mr. Obama's Hamburger Diplomacy in and around Washington.
He famously treated Russian President Dmitry Medvedev to a burger at Ray's Hell Burger, which is across the Potomac in Arlington. And he's also frequented Five Guys, an institution in the Washington area that has now spread its franchises across the country.
But in hitting Good Stuff the president is invading territory more to his wife's liking. Mrs. Obama has been there several times, and even has a burger named after her: The Michelle Melt Free Range Turkey Burger.
Despite Mrs. Obama's push for healthy eating, burgers are a clear favorite of the president's — or, more exactly, cheeseburgers. It's been his most common order on campaign and official presidential stops.
It was his first meal on Air Force One, and since his appearance on the national stage as a presidential candidate it has been his most common order on campaign and official presidential stops.
His order on Wednesday: burger, fries and a shake. 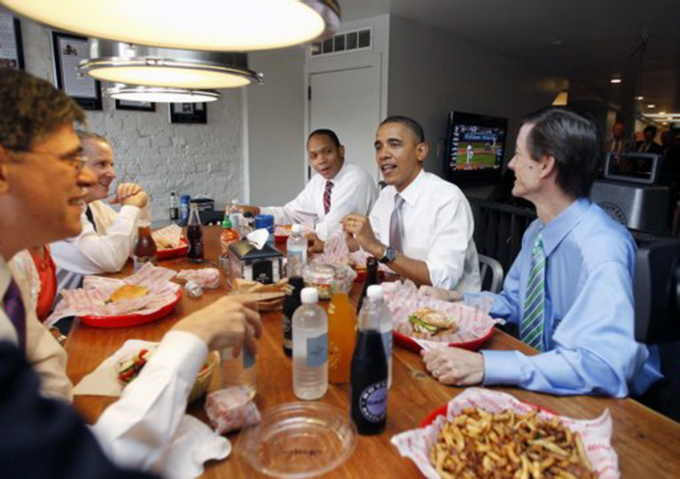 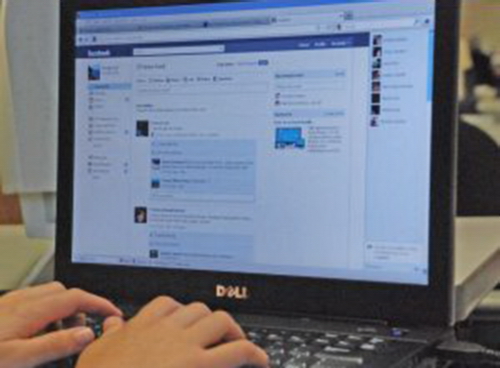 If you're a parent, you've probably experienced a certain degree of fear at some point or another about your kids using the Internet. Maybe you peer over their shoulders while they check their Facebook pages, or try to catch glimpses of IM conversations they have with their friends. But do you worry about how they communicate online with their teachers? A new Missouri state law make the case that you should.
The Amy Hestir Student Protection Act, signed into law on July 14, is 35 pages long, but it is two sentences that are causing quite a stir and earning it the nickname the "Facebook Law."

Republican State Sen. Jane Cunningham, who sponsored the bill, told HuffPost that its primary aim is to prevent teachers who have sexually assaulted a student from being placed in another district, a practice the Missouri Department of Education has referred to as “passing the trash” (Hestir was repeatedly assaulted as a student by a middle school teacher who worked in several Missouri school districts.).
Cunningham insisted that she's not preventing teachers from joining social networks or becoming Facebook friends with students. Rather, the idea is to discourage teachers and students from communicating exclusively, without a parent, guardian or school administrator being able to access the message.
Click Here to Read More.