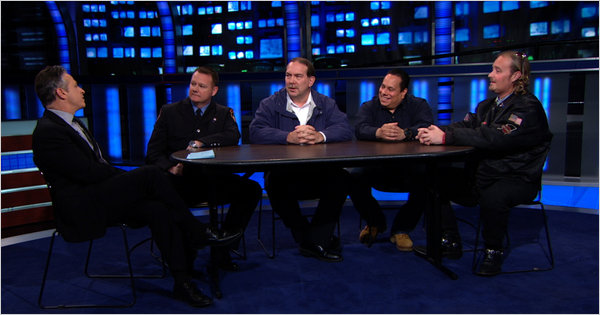 By BILL CARTER and BRIAN STELTER

Did the bill pledging federal funds for the health care of 9/11 responders become law in the waning hours of the 111th Congress only because a comedian took it up as a personal cause?

And does that make that comedian, Jon Stewart — despite all his protestations that what he does has nothing to do with journalism — the modern-day equivalent of Edward R. Murrow?


Certainly many supporters, including New York’s two senators, as well as Mayor Michael R. Bloomberg, played critical roles in turning around what looked like a hopeless situation after a filibuster by Republican senators on Dec. 10 seemed to derail the bill.

That show was devoted to the bill and the comedian’s effort to right what he called “an outrageous abdication of our responsibility to those who were most heroic on 9/11.”

Though he might prefer a description like “advocacy satire,” what Mr. Stewart engaged in that night — and on earlier occasions when he campaigned openly for passage of the bill — usually goes by the name “advocacy journalism.”
There have been other instances when an advocate on a television show turned around public policy almost immediately by concerted focus on an issue — but not recently, and in much different circumstances.
“The two that come instantly to mind are Murrow and Cronkite,” said Robert J. Thompson, a professor of television at Syracuse University.
Edward R. Murrow turned public opinion against the excesses of Senator Joseph McCarthy in the 1950s. Mr. Thompson noted that Mr. Murrow had an even more direct effect when he reported on the case of Milo Radulovich, an Air Force lieutenant who was stripped of his commission after he was charged with associating with communists. Mr. Murrow’s broadcast resulted in Mr. Radulovich’s reinstatement.
Walter Cronkite’s editorial about the stalemate in the war in Vietnam after the Tet Offensive in 1968 convinced President Lyndon B. Johnson that he had lost public support and influenced his decision a month later to decline to run for re-election.
Though the scale of the impact of Mr. Stewart’s telecast on public policy may not measure up to the roles that Mr. Murrow and Mr. Cronkite played, Mr. Thompson said, the comparison is legitimate because the law almost surely would not have moved forward without him. . Click Here for more info.
.
. 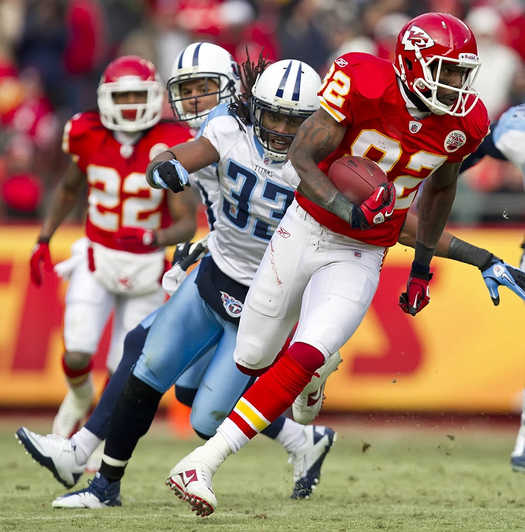 
The waiting game has ended for the Chiefs.

They did their part today, defeating the Tennessee Titans 34-14 at Arrowhead Stadium. The 10-5 Chiefs now clinched the AFC West championship and a playoff berth with San Diego's loss to the Bengals in Cincinnati 34-20 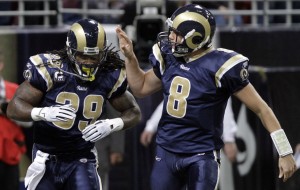 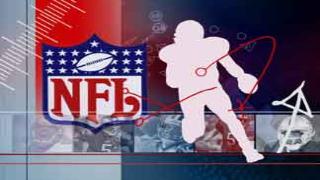 NEW YORK (AP) - The NFL moved the Vikings at Eagles game from Sunday night to Tuesday because of an expected blizzard that could dump up to 20 inches snow on Philadelphia.
The game will be played at 8 p.m. EST., and televised nationally by NBC.
Philadelphia Mayor Michael Nutter declared a snow emergency as of 2 p.m. EST Sunday.
In announcing the postponement, NFL spokesman Greg Aiello said:
"Due to public safety concerns in light of today's snow emergency in Philadelphia, tonight's Vikings-Eagles game has been postponed. Because of the uncertainty of the extent of tonight's storm and its aftermath, the game will be played on Tuesday night at 8 p.m. This will allow sufficient time to ensure that roads, parking lots and the stadium are fully cleared. The National Weather Service states that a winter storm warning in Philadelphia remains in effect until 1 pm on Monday."
The Vikings already have had two home games affected by the weather this season. Their game against the Giants on Dec. 12 was postponed a day after Minneapolis got 15 inches of snow. It was then moved to Detroit when the Metrodome roof collapsed.
Their game against Chicago the following week was played at the University of Minnesota's outdoor stadium because of the damaged roof.
Minnesota (5-9) is out of playoff contention, but the Eagles (10-4) can clinch the NFC East with a win.. Click Here for more info. 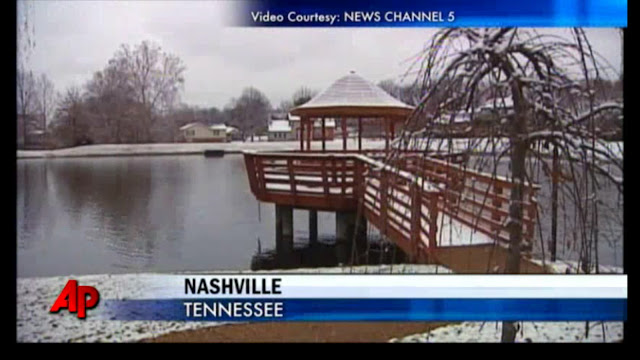 
A band of frigid weather was snaking up the East Coast on Sunday, promising blizzards and a foot of snow for New York City and New England, while several states made emergency declarations as the storm caused crashes and deaths on slick roads.
Airlines grounded hundreds of flights Sunday along the Northeast corridor in anticipation of the storm. New York City-area airports alone canceled close to 1,000 flights. The Port Authority of New York and New Jersey said that number was expected to rise Sunday. Snow had started to fall in the area by late morning.
Travel misery began a day earlier in parts of the South, where a rare white Christmas came with reports of dozens of car crashes.
In Washington transportation officials pretreated roads and readied 200 salt trucks, plows and other pieces of equipment to fight the 6 inches or more expected to fall in the Mid-Atlantic region.
The Northeast is expected to get the brunt of the storm. Forecasters issued a blizzard warning for New York City for Sunday and Monday, with a forecast of 11 to 16 inches of snow and strong winds that will reduce visibility to near zero at times. A blizzard warning was also in effect for Rhode Island and most of eastern Massachusetts including Boston, with forecasters predicting 15 to 20 inches of snow. A blizzard warning is issued when snow is accompanied by sustained winds or gusts over 35 mph.
As much as 18 inches could fall on the New Jersey shore with wind gusts over 40 mph.
Philadelphia Mayor Michael Nutter declared a snow emergency as of 2 p.m. Sunday, and he urged residents to stay off the roads. In Boston, Mayor Thomas Menino declared a snow emergency that bans parking on all major streets.
. Click Here for more info. 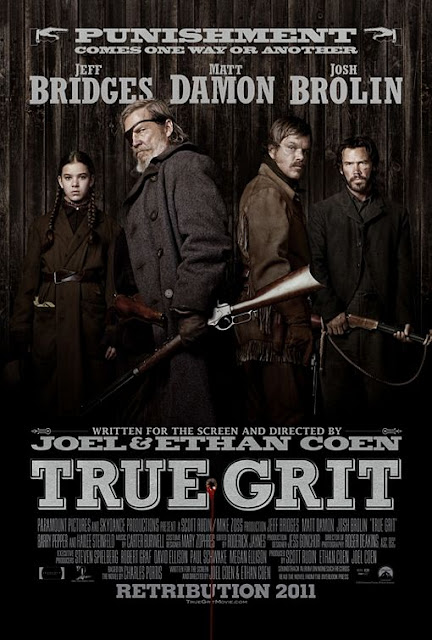 Here are North American box office estimates for Wednesday, Thursday, Friday, and Saturday for the 5-day holiday weekend. Christmas Eve always means very soft moviegoing while Christmas Day gets going late in the day. An East Coast blizzard should hurt Sunday's moviegoing totals overall. Fox's unanticipated Gulliver's Travels starring Jack Black opened Saturday in 2,546 theaters and did the expected poor business of $3.5 million, showing that 3D higher ticket prices are no help if the movie isn't any good. The Weinstein Co's Oscar-touted The King's Speech widened to 700 runs after platforming 4 weeks and finished in 11th place. Interesting to note that, one week after opening and already Jim Brooks' How Do You Know bomb for Sony has fallen out of the Top 10 (below) despite a top cast.

This was supposed to be the big get-out-the-audience Christmas weekend family comedy, and exit polling showed the audience was 57%/43% female vs. male, and 53%/47% under vs over age 30. Granted, the Christmas Day total was almost 3 times Christmas Eve. But these are Universal's own less-than-encouraging numbers as well as 3-day weekend and 5-day holiday cumes for this third in the Meet The Parents/Meet The Fockers franchise starring Robert de Niro and Ben Stiller, with the Friday and Saturday estimates for Little Fockers only about 75% of the take for the same exact play period of Meet The Fockers which also opened during the Christmas holiday. Watching the sausage being made when it came to this major studio laugher wasn't pretty. At one point, Universal contemplated replacing director Paul Weitz with producer-writer John Hamburg on The Little Fockers. But that would have resulted in a Directors Guild dust-up. Plus, Adam Fogelson had just taken over as Uni Pictures chairman and didn't want to throw the already traumatized studio into a worse funk. So the decision was made to fix the movie in post. Weitz, Hamburg, Stiller, and Jay Roach spent two months going through the footage and finalized a week of pickups with all the principal cast. So Universal scheduled more than half a dozen full-blown scenes, including 4 with Dustin Hoffman who originally had been written out of the threequel when the studio couldn't reach a deal with him. But Hamburg and Roach helped convince Dustin to reprise his role opposite Barbra Streisand and he didn't come cheap. This is now at least a $100M budget film. Universal continued to spin that Little Fockers could have gone out "as is" but the studio "wanted to make it better as an investment in the future of the franchise." I always thought this threequel would kill the studio's golden goose -- and with only 9% positive reviews on Rotten Tomatoes and a "B-" CinemaScore, it likely did.

Given that Christmas Eve is more of an adult moviegoing time, it's not surprising that the writer/director Coen Brothers' Oscar-touted 2D Western take on the Charles Portis novel (and they claim not to have watched the first movie that won John Wayne his Oscar in 1969) jumped into the No. 2 spot Friday. But it stayed there Saturday, which was a shock. Turns out this is the biggest opener for a Coen Brothers film (passing Burn After Reading's $19.1M) and bigger even than that other Oscar-touted pic The Social Network's $22.5M weekend opener. "It almost doubled people's expectations and it beat Tron: Legacy 3D for 2nd which no one saw coming," a Paramount exec gushed. With only a $38M budget and a big 95% positive reviews on Rotten Tomatoes, plus great acting and quirky dialogue, this pic has a good shot of making coin. Not bad for a movie that no one could understand why anyone would want to remake in the first place. (And, yes, I consider this a remake.)

3. Tron 3D (Disney) Week 2 [3,451 Theaters]
Wednesday $5.6M, Thursday $6.1M, Friday $3.9M, Saturday $7.8M
3-Day Weedend $20.1M (-54%), Cume $88.3M
There's no doubt that Tron: Legacy 3D will pass $100M domestic grosses before the end of this year. But with a budget estimated as $150M, and a global marketing push estimated at another $120M, this Christmas gift from Walt Disney Studios' previous Dick Cook administration but premoted by the present-day Rich Ross crew in charge will have to depend on international overperforming to break even. Abroad, Tron: Legacy is currently in release in 34 territories representing 65% of the international market and has done $65.5M, for a worldwide total now of $153.8M.
. Click Here for more info.