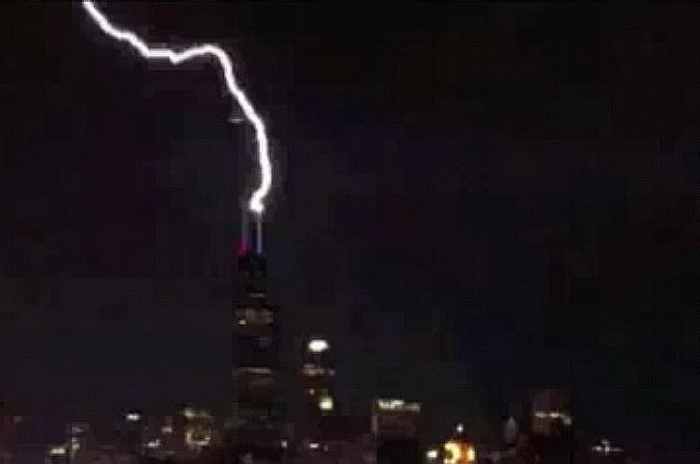 Massive lighting bolt strikes the spires on the Chicago Willis Tower. No damage was reported.  June 2011 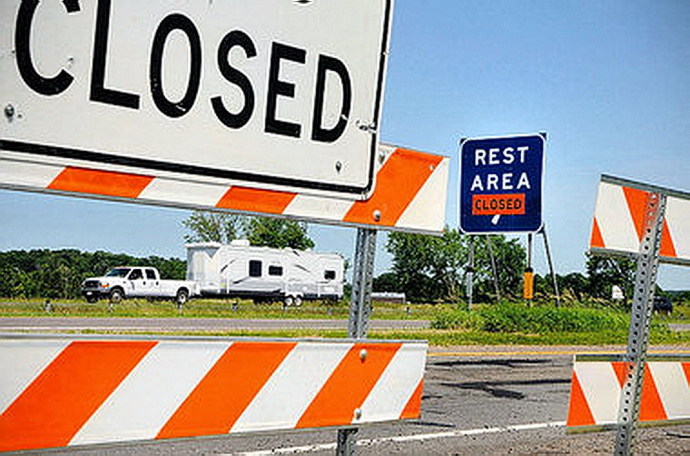 
Broken deals, bitter words and a state shuts down

Talks imploded Thursday between DFL Gov. Mark Dayton and Republican legislative leaders in the final hours before a midnight deadline, and Minnesota began a historic government shutdown.
"This is a night of deep sorrow for me," Dayton said in an address at 10 p.m. that was punctuated by jeers and hisses from Republicans, including some lawmakers.
The governor said his last offer would have raised income taxes only on those earning more than $1 million a year -- an estimated 7,700 Minnesotans, or 0.3 percent of all taxpayers, according to the Revenue Department.
Republicans rejected the proposal, Dayton said, because they "prefer to protect the richest handful of Minnesotans at the expense of everyone else."
Republican leaders made their own statement, saying Dayton's proposal for dealing with the projected $5 billion deficit would cause irreparable harm to the state's economy for generations.
"We will not saddle our children and grandchildren with mounds of debts, with promises for funding levels that will not be there in the future," said House Speaker Kurt Zellers, R-Maple Grove. "This is debt that they can't afford. It's debt that we can't afford right now."
Earlier, as it became clear there would be no deal, Republicans staged a sit-in in the legislative chambers, demanding Dayton call a special session to keep the state running.
"Our guys, obviously, are very comfortable with where we are," Zellers said, standing in the Minnesota House chamber at 8:30 p.m.
The political fight that has dominated the Capitol since January now will play out in public, as both sides try to win over Minnesotans in the hope that public sentiment will force the other side to a deal.
Dayton struck a combative stance, saying the July 4th holiday "reminds us that there are causes and principles worth struggling for" and worth "suffering temporary hardship to achieve."
The union-backed Alliance for a Better Minnesota, a key factor in Dayton's campaign last year, will run radio ads over the weekend in Bemidji, Brainerd and Duluth, focusing on reaching Minnesotans vacationing at the lakes. The group also created the website www.shutdownshame.com to highlight the effects of the Republican budget.
Soon after talks broke down, both sides lifted their self-imposed news blackout and began releasing details of their final budget offers.
The GOP proposed delaying another $700 million in payments owed to schools, which would add to the more than $1 billion the state already owes K-12 schools.
Republicans also offered to issue "tobacco bonds" of an unspecified amount to cover any remaining budget gap. Sources said Dayton considered the offer, but he criticized it as unwise borrowing late Thursday.

Policy as a bargaining chip
Talks may have also broken down because an earlier GOP offer asked Dayton to accept controversial policy positions the Republicans pushed for this year, including photo ID requirements at the polls and abortion restrictions. An offer sheet provided to the Star Tribune said the policy adoptions were in exchange for "new revenue in a compromise offer."
That deal also would have required tuition caps to be put in place at the University of Minnesota and MnSCU as well as a 15 percent reduction in the number of state workers by 2015. Tendered Wednesday night, the offer would have required a special session Thursday.
Throughout a long day of negotiations Thursday, anxiety was palpable across the Capitol.
Legislators coming to the building were greeted by hundreds of union protesters, urging the two sides to break the deadlock.
Gathering on the Capitol steps, some protesters held signs saying "I am a Proud Public Worker" and "Government Shutdown -- Harming Countless Minnesotans Is Not OK." Some held babies and others umbrellas to protect them from the burning summer sun. They chanted and held other signs like "Great wealth = Great responsibility."
Earlier in the day, Dayton was spotted through his office window at the head of the table, flanked by Zellers and Senate Majority Leader Amy Koch, R-Buffalo. They sipped Diet Coke and bottled water as they occasionally passed pieces of paper and computer printouts to one another, nodding and smiling slightly as one of the participants made a point.
As the afternoon wore on, legislators admitted it was tough to keep their calm as the state careened toward a political meltdown that could cost them re-election.
Early in the morning, Rep. Pat Garofalo, a Republican who chairs the House Education Finance Committee, posted on his Twitter account: "You can't spell FAILED without DFL!"
It was a blistering attack at a time when most legislators had dialed down the partisan bickering. An aide to Garofalo said he wouldn't comment on the posting. 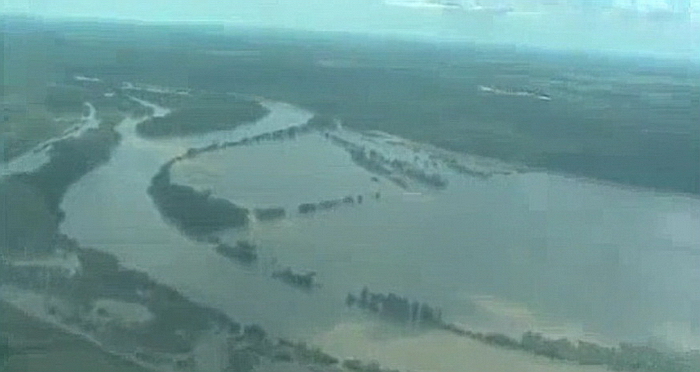 JEFFERSON, Mo. – President Barack Obama has issued a federal emergency declaration for the state of Missouri in response to ongoing damaged being caused by rising floodwaters along the Missouri River.
The declaration comes at the request of Gov. Jay Nixon, who said federal intervention will be critical as the state continues to deal with massive flooding, which has already toppled numerous levees in the northwestern corner of the state causing significant damage to homes, businesses and farmland.
“We are in for a long fight this summer against destructive flooding, and every necessary and available resource will be used,” Nixon said while praising the president’s action.
The declaration allows federal agencies to provide emergency services, including setting up long-term shelters, appropriating supplies and assisting in pumping and sandbagging efforts.
Several communities in Andrew, Atchison, Buchanan, Holt and Platte counties already have been evacuated, or are in the process of evacuation, because of flooding. Missouri River flooding has closed sections of Interstate 29 and U.S. highways 136 and 159 in the area as well.
The counties along the Missouri River that are already affected or will be affected by the flooding are Andrew, Atchison, Boone, Buchanan, Callaway, Carroll, Chariton, Clay, Cole, Cooper, Franklin, Gasconade, Holt, Howard, Jackson, Lafayette, Moniteau, Montgomery, Osage, Platte, Ray, Saline, St. Charles, St. Louis and Warren, as well as the City of St. Louis. Clark and Lewis counties have been impacted by the flashfloods in northeast Missouri.
The President’s emergency declaration covers all of those counties and the City of St. Louis.

Missouri Highway Patrol: Every Available Trooper on the Road This Weekend 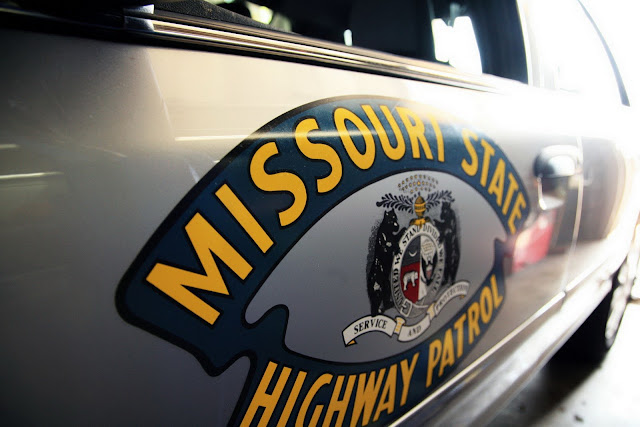 
Every available trooper on the road tonight, this weekend

Troopers are going to be out in full force to keep holiday travelers safe. Programs like 20-Mile Trooper and CARE seek to reduce crashes, injuries, and fatalities. Lieutenent Jon Hotz says the Fourth of July is one of the three busiest holidays for summertime travelers and every available officer will be out to assist motorists and enforce the law.
He says the 20 mile trooper program will saturate Interstates 29, 44, 55 and 70 as well as highways 60 and 61. Troopers are also participating in the nationwide CARE program — Combined Accident Reduction Effort.
Motorists needing assistance can call *55 from their cellular phones to reach Highway Patrol Dispatch in their area.
Hotz last last year 13 people were killed on Missouri roads July four weekend — 472 were injured. He says that’s an injury or death every 9.6 minutes.
Hotz says even though fatalities are trending down over the past few years, which is a positive sign, last year’s holiday was still tragic for many.
The holiday counting period starts tonight, July 1, at 6 p.m. and ends Monday,  July 4, at midnight.
Hotz says inattention and speed continue to be the biggest contributors to traffic crashes. During holidays, he says people can be even more preoccupied with their passengers, phones and more. The patrol urges drivers to pay attention to what they’re doing, as well as to what other drivers are doing.