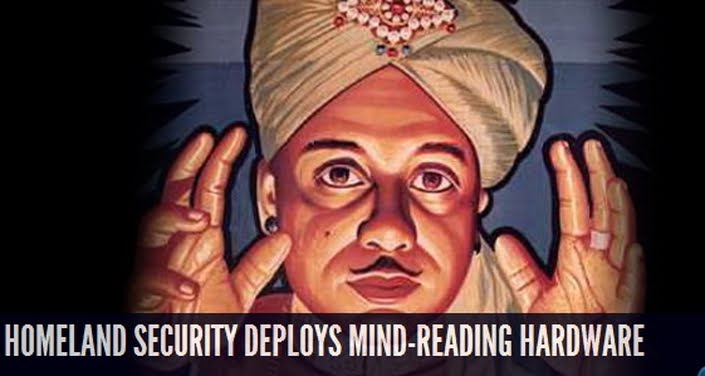 Guilty until proven innocent – physiological sensors and DHS interrogations to control behavior at sports stadiums, malls, train stations, airports and other public places
Paul Joseph Watson
Prison Planet.com
June 1, 2011, 2011
___________________________________________________________________________________
Chilling technology straight out of Minority Report that would subject Americans to pre-crime interrogations and physiological scans to detect “malintent” at sports stadiums, malls, airports and other public places has moved closer to being implemented after Homeland Security’s FAST program passed its first round of testing.
“Future Attribute Screening Technology (FAST), a US Department of Homeland Security (DHS) programme designed to spot people who are intending to commit a terrorist act, has in the past few months completed its first round of field tests at an undisclosed location in the northeast,” reports Nature.
The system works by using a computer program that studies physiological indicators of a person, such as heart rate and the steadiness of a person’s gaze, and then uses the data to make a judgment on whether that individual has “malintent”.
Of course, the mere sight of TSA goons conducting grope-downs, radiation-firing body scanners, iris-scanning devices and the routine stresses of travel are all likely to raise heart rates and cause anxiousness in people, so the program will undoubtedly snag innocent travelers. The well-trained, cool and composed terrorist will slip right through, rendering the entire exercise obsolete.
But this isn’t really about catching terrorists, if it was then the DHS would mimic Israel’s highly effective human intelligence system that is far more likelier to spot real bad guys. This is about guilty until proven innocent, and forcing every American to prove that they are a well-behaved drone who won’t complain about a low grade pervert sticking his hand down their pants.
Remember, the TSA already has “behavior detection officers” whose job it is to watch for people who express dissatisfaction at being groped, including not smiling. Not enjoying having your junk fondled by a complete stranger is now a “suspicious activity”. FAST’s primary purpose is to chill dissent about harassment dished out by TSA goons, by intimidating travelers into thinking they will be prevented from flying, taking the train, entering a mall or a sports stadium, unless they accept the grope down or the body scan with complete subservience.
“Steven Aftergood, a senior research analyst at the Federation of American Scientists, a think-tank based in Washington DC that promotes the use of science in policy-making, is pessimistic about the FAST tests. He thinks that they will produce a large proportion of false positives, frequently tagging innocent people as potential terrorists and making the system unworkable in a busy airport. “I believe that the premise of this approach — that there is an identifiable physiological signature uniquely associated with malicious intent — is mistaken. To my knowledge, it has not been demonstrated,” he says. “Without it, the whole thing seems like a charade.”
The report claims that, “FAST relies on non-contact sensors, so it can measure indicators as someone walks through a corridor at an airport, and it does not depend on active questioning of the subject,” and yet in DHS’ promotional video for the program, participants are bombarded with questions to ascertain whether they are terrorists.
The clip above shows individuals who attend “security events” being led into trailers before they are interrogated as to whether they are terrorists while lie detector-style computer programs analyze their physiological responses. The subjects are asked about their whereabouts, and if they are attempting to smuggle bombs or recording devices into the “expo,” proving that the technology is intended to be used at public events and not just airports. Individuals who do not satisfy the first lie detector-style test are then asked “additional questions”.
The fact that Homeland Security’s own internal reports list supporting political candidates like Ron Paul, flying US flags, owning gold, displaying political bumper stickers, or owning firearms as signs of behavioral malintent that could be linked to terrorism or extremism tells you all you need to know about how FAST checkpoints could be used to snag political dissidents who commit the thought crime of believing they still had any rights under the US Constitution that Janet Napolitano is gleefully ripping to shreds.
In the coming years, staying away from airports won’t be enough to avoid a run-in with TSA goons. Homeland Security has embarked on a massive gestapo-like occupation of America where “security” checkpoints will litter highways and roads, transport hubs, as well as public events and anywhere crowds gather.
DHS has already announced that TSA agents and VIPR teams will be expanding their mobile radiation-scanning checkpoints from rest stops to highways and roads in general, as Big Sis accelerates Soviet-style levels of control over the population.
*********************
Paul Joseph Watson is the editor and writer for Prison Planet.com. He is the author of Order Out Of Chaos. Watson is also a regular fill-in host for The Alex Jones Show.

The US Department of Homeland Security is developing a system designed to detect "hostile thoughts" in people walking through border posts, airports and public places. The DHS says recent tests prove it works.

Project Hostile Intent as it was called, is aimed to help security staff choose who to pull over for a gently probing interview - "or more".

DHS Claims The FAST Program has been through stringent privacy controls and that the data is never matched to a name. It is only used to make decisions about whether to question someone, and then discarded.