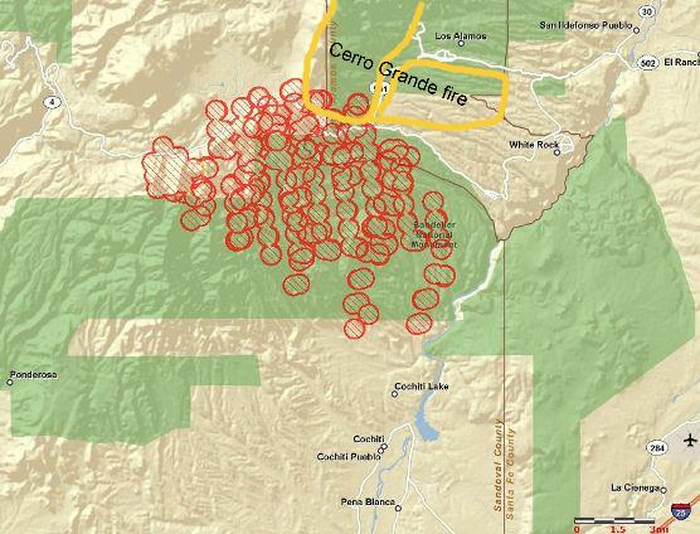 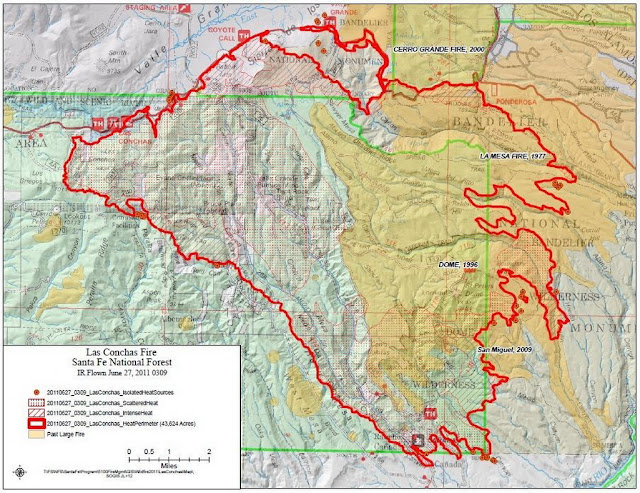 Cause: Unknown, under investigation

Size: 43,597 acres as per infrared data. The fire burned actively all day to the north/northeast. Running, crowning, and spotting up to a half a mile of the head of the fire was observed.

Resources Committed: Joe S. Reinar's Type I Incident Management Team has been ordered. Three helicopters, two Hotshot crews, nine hand crews, five dozers and thirteen engines have been fighting the fire and more are expected to arrive. This is an interagency fire fighting effort. In fire management we all work together. We are working with local, state and federal agencies.

Structures/threats: Structures and powerlines. Power and phone lines are down in the area. The fire is approximately 1 mile southwest of the boundary of the Los Alamos National Laboratory (LANL). The fire has not entered Laboratory property at this time. All radioactive material is appropriately accounted for and protected.

Evacuations: The city of Los Alamos is under MANDATORY evacuation as of 1:45 pm. White Rock remains under VOLUNTARY evacuation. Cochiti Mesa, Las Conchas, Bandelier National Monument, and campgrounds near the fire were evacuated yesterday. There were approximately 100 residents evacuated from Cochiti Mesa and Las Conchas, and no evacuees reported to the evacuation center at La Cueva Fire Station.

If you live near the fire or near the Forest, you should always be ready for emergencies including evacuations, the three-step process is easy to remember and implement:

Ready - Take personal responsibility and prepare long before the threat of a wildland fire so your home is ready in case of a fire. Create defensible space by clearing brush away from your home. Use fire-resistant landscaping and harden your home with fire-safe construction measures. Assemble emergency supplies and belongings in a safe spot. Plan escapes routes. Make sure all those residing within the home know the plan of action.
Set - Act immediately. Pack your vehicle with your emergency items. Remember your six P's: people, personal computers, pets, pills, papers and pictures. Stay aware of the latest news and information on the fire from local media and your local fire department.
Go - Leave early! Follow your personal action plan. Doing so will not only support your safety, but will allow firefighters to best maneuver resources to combat the fire.

Road Closures: NM 4 is closed at Jemez Falls Campground and at NM 510.

Los Alamos National Labs: The Los Alamos National Laboratory will be closed due to the fire. All laboratory facilities will be closed for all activities, and nonessential employees are directed to remain off site. Employees that are considered nonessential should not report to work unless specifically directed by their line managers. Employees should check local news sources, the LANL Update Hotline (505.667.6622) and the LANL web page www.lanl.gov fo updates. All radioactive and hazardous material is appropriately accounted for and protected. LANL staff is coordinating the on-site response and supporting the county and federal fire response.

Summary: Active fire behavior has been observed with running and spotting on both sides of NM 4. 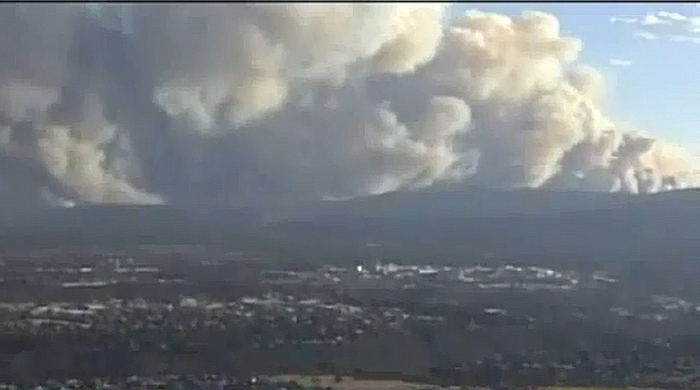 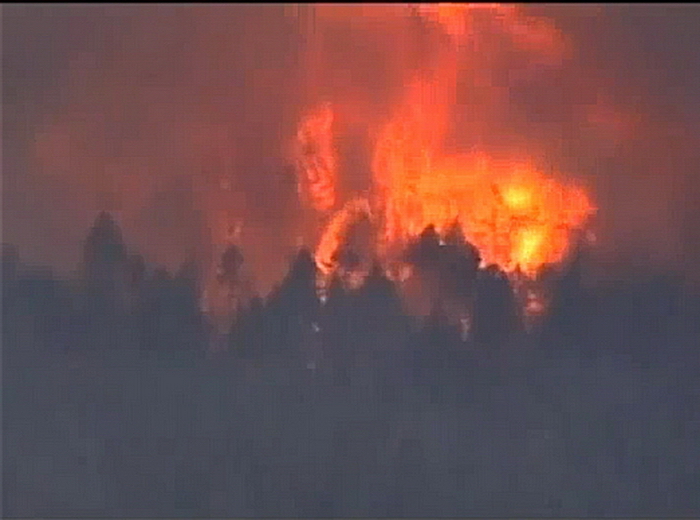 By Zelie Pollon
SANTA FE, N.M., June 27 (Reuters) - A raging wildfire on Monday briefly entered the property of the preeminent U.S. nuclear facility, Los Alamos National Laboratory, a vast complex that houses research laboratories and a plutonium facility.
A mandatory evacuation was ordered for the town of Los Alamos, which has a population of about 12,000. The speed at which the fire has grown surprised fire officials.
The laboratory, which ensures the safety and reliability of the U.S. nuclear stockpile, is a national security research facility located in the Jemez mountains of northern New Mexico.
It was set up in 1943 as part of the Manhattan Project to create the first atomic bomb and still maintains the nation's largest nuclear weapons arsenal.
Firefighters were able to douse flames on a one-acre (0.4 hectare) "spot fire" just inside the southwestern boundary of the lab site, about 25 miles (40 km) outside Santa Fe, authorities said.
Buildings still have not been touched by flames, and authorities said there was little threat to sensitive areas of the 28,000-acre complex (11,000 hectare).
The laboratory's plutonium facility is on the northeast side of the complex, while the fire seems to be moving south and east, said lab spokesman Kevin Roark.
"The facility is very well protected from any kind of wild land fire threat," said Roark. He said the facility survived a May 2000 wildfire that claimed some lab buildings and did more than $1 billion in damage.
Explosive materials on the laboratory's grounds are stored safely in underground bunkers made of concrete and steel, as well as earthen berms, Roark said.
"This fire is going to be with us for a while. It has the potential to double and triple in size," Los Alamos Fire Chief Doug Tucker said.
Nuclear watchdog groups are keeping a close eye on the fire, said Jay Coughlin, executive director of Nuclear Watch New Mexico. _________________________________________________________________________

LOS ALAMOS, N.M. (AP) -- - Authorities ordered Los Alamos evacuated Monday as a fast-growing and unpredictable wildfire bore down on the northern New Mexico town and its sprawling nuclear laboratory.
The blaze that began Sunday already had destroyed a number of homes south of the town, which is home to some 12,000 residents. It also forced closure of the nation's pre-eminent nuclear lab while stirring memories of a devastating blaze more than a decade ago that destroyed hundreds of homes and buildings in the area.
Los Alamos County fire chief Doug Tucker said the blaze Sunday night was the most active fire he had seen in his career, forcing residents near Cochiti Mesa and Las Conchas to flee with "nothing but the shirts on their back."
He said at 44,000-acre blaze had destroyed at least 30 structures but it wasn't clear how many were homes.
The fire has the potential to double or triple in size, Tucker said, and firefighters had no idea which direction the 60 mph-plus winds would take it.
"We are preparing for the fire to go in any direction," Tucker said.
It was not immediately clear how many people were being evacuated. Nearly 18,000 people live in Los Alamos and the bedroom community of White Rock, which is not being ordered to evacuate.
Los Alamos National Laboratory was closed Monday as the blaze burned within a mile of its southern edge.
Officials said that more than 100 residents evacuated their homes south of town Sunday as the fire swelled to 68 square miles and moved to the lab's southern edge.
The famed lab, where scientists developed and tested the first atomic bomb during World War II, activated its emergency operations center overnight and cut natural gas to some areas as a precaution.
Officials said all hazardous and radioactive materials were being protected.
The blaze started on private land about 12 miles southwest of Los Alamos. Flames and smoke could be seen from the outskirts of Albuquerque, about 80 miles away.
On Monday morning, the Pajarito plateau upon which the lab sits was awash in a thick haze, while a charred stench permeated the area. On the southwestern edge of the plateau, white smoke filled the canyons above Cochiti reservoir and on the north end heavy black columns of smokes were rising in the air.
Cars headed down the two-lane highway that snakes from Los Alamos to Pojoaque were stuffed with belongings as residents fled the blaze.
The fire was eerily similar to one of the most destructive fires in New Mexico history. That fire, the Cerro Grande, burned some 47,000 acres - 73 square miles - in May 2000 and caused more than $1 billion in property damage. About 400 homes and 100 buildings on lab property were destroyed in that fire.
That blaze also raised concerns about toxic runoff and radioactive smoke, although lab spokesman Kevin Roark said no contaminants were released in the Cerro Grande fire.
Environmental specialists from the lab were mobilized and monitoring air quality on Monday, he said, but the main concern was smoke.
Still, there were questions about whether firefighters would be prepared if the fire moved into main areas of the lab.
In 2009, the U.S. Department of Energy's inspector general issued a report that said Los Alamos County firefighters weren't sufficiently trained to handle the unique fires they could face with hazardous or radioactive materials at LANL.
Lab and fire department officials at the time said the report focused too much on past problems and not enough on what had been done to resolve them. Some problems also were noted in previous reports.
Greg Mello, with the anti-nuclear watchdog Los Alamos Study Group, said the group doesn't have enough information "to formulate any views on safety at this point."
"It is important to remind ourselves that the site has natural hazards ... and Murphy's Law is still about the best enforced law in the state," he said.
Meanwhile, the biggest blaze in Arizona history was 82 percent contained after burning through 538,000 acres in the White Mountains in northeast Arizona. The fire started May 29 and has destroyed 32 homes. It's believed to have been caused by a campfire.
And in Colorado, about 100 firefighters are battling a wildfire that broke out in a canyon northwest of Boulder.
Fire officials have put 340 homeowners on standby to evacuate. No structures are immediately threatened by the fire.
In southern Colorado, hot, windy weather has caused a wildfire that's been burning since June 12 to spread. The Duckett fire grew by about 400 acres over the weekend but it's not threatening any homes. Most the growth has been in a steep, rugged terrain in the Sangre de Cristo Mountains.
The fire is burning on 7-square miles and is 80 percent contained.
------
Associated Press writer Jeri Clausing contributed from Albuquerque.
.